One is a rude jerk. The other, the life of the party.

It was hate at first sight.

Pro beach volleyball players Finn Callahan and Dexter Savage have been rivals since college. While Finn always comes out on top on the court, Dexter’s carefree and fun-loving personality earns him scores of adoring men and women. And as much as Finn fights to deny it, there’s another reason for the tension he feels when Dex is around. Hate wasn’t the only thing he felt when he first laid eyes on his opponent.

When they’re forced to team up, the two men must bury their differences—on and off the court—if either of them is going to succeed professionally. END_OF_DOCUMENT_TOKEN_TO_BE_REPLACED

Blurb: I’m Tyler Lindsey, and until recently, I had an okay apartment, an okay girlfriend, and an okay job as a bellboy at a respectable Boston hotel. Then rock star Chris Raiden died right before I brought his room service—stiffing me on the tip, by the way—and my life went to hell. My fifteen minutes of fame was more like five seconds, and my girlfriend left me in disgust.

But even worse—Chris is haunting me. Not the room where he died, like a normal ghost. No, somehow he’s stuck to me and is insisting on taking care of a bunch of unfinished business in California. So now I have to traipse across the country with the world’s most narcissistic ghost.

But . . . I keep having these weird thoughts. Thoughts about how much I like the way he makes me laugh. Thoughts where I kind of want to kiss the emo-narcissist, even though he’s a ghost and an asshole and I can’t touch him anyway. And even if I could, what will happen when he finishes his business and nothing’s keeping him here anymore?

END_OF_DOCUMENT_TOKEN_TO_BE_REPLACED

Blurb:  In a world where a werecat virus has changed society, Roan McKichan, a born infected and ex-cop, works as a private detective trying to solve crimes involving other infecteds.

Roan is working a frustrating stalker case, with no shortage of suspects and little solid evidence, when he comes across a startling eyewitness living in his car across the street from the scene. A tiger-strain infected, the only one Roan’s ever met, Paris Lehane is a former Canadian golden boy who suffered a breakdown after becoming infected in college.

While Roan’s ex, Diego “Dee” Cole, warns against falling for the infected Paris, a man doomed to die, Roan struggles with his attraction and the knowledge that no happily ever after is possible for them.

But is the knowledge enough to discourage him from following his heart? Roan helps Paris out of homelessness, and maybe a special hospital can help Paris with the infection, but Roan’s got his hands full with this case, and there’s no end in sight. END_OF_DOCUMENT_TOKEN_TO_BE_REPLACED 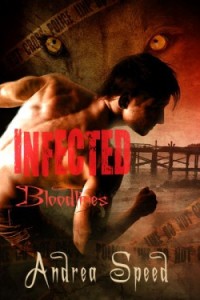 In a world where a werecat virus has changed society, Roan McKichan, a born infected and ex-cop, works as a private detective trying to solve crimes involving other infecteds.

The newly married Roan is struggling to balance his work with his home life as he grows increasingly distracted by his husband Paris’s declining health. One case with strong emotions attached takes up most of his time: finding the murderer of a missing little rich girl.

It’s a family with secrets so toxic they’d rather no one investigate, and there’s no shortage of suspects. But despite the dangers and obstructions involved, Roan won’t stop… until he loses something infinitely precious as well.

END_OF_DOCUMENT_TOKEN_TO_BE_REPLACED

Blurb:  Network news anchor Daniel Halstrom is at the top of his field, but being at the bottom of the social ladder—being a slave—makes that hard to enjoy. Especially when NewWorld Media, the company that’s owned him since childhood, decides to lease him privately on evenings and weekends to boost their flagging profits.

Daniel’s not stupid; he knows there’s only one reason someone would pay so much for what little free time he has. But dark memories of past sexual service leave him certain he won’t survive it again with his sanity intact.

He finds himself in the home of Carl Whitman, a talk show host whose words fail him when it comes to ordering Daniel into his bed. Carl can’t seem to take what he must want, and Daniel’s not willing to give it freely. His recalcitrance costs him dearly, but with patience and some hard-won understanding, affection just might flourish over fear and pain. Carl holds the power to be an anchor in Daniel’s turbulent life, but if he isn’t careful, he’ll end up the weight that sinks his slave for good.

END_OF_DOCUMENT_TOKEN_TO_BE_REPLACED 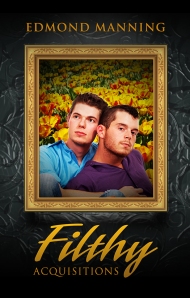 Blurb: Keldon Thurman hates his job, purchasing serial killer art for a private investor. He would quit if he weren’t completely impoverished, but with no life skills and no ways to generate income, Keldon has no options.

However, Acquisition Number Five proves to be more challenging than expected. Wheel-chair bound Irene Woullet and her handsome nurse caretaker, Joshua Greene, refuse to cooperate. Keldon’s only chance is to seduce the old-fashioned, simple-living Josh in the hopes that Joshua can persuade Irene. But Keldon has to work fast—he has only two dates to win Josh’s affection.

With love’s potential in bloom, how can Keldon live with his own worsening conscience as he gathers these filthy acquisitions?