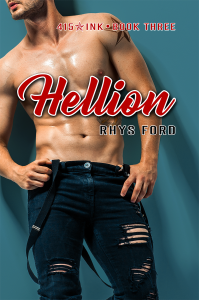 From the moment SFPD Detective Ruan Nicholls meets Ivo Rogers, he knows the tattoo artist is going to bring chaos to his neat, orderly life. A hellion down to the bone, Ivo is someone Ruan not only doesn’t understand, he’s not even sure he needs to. Everything about Ivo is vibrant, brash, cocky, and arrogant, and Ruan wants no part of him.

Or at least that’s the lie he tells himself when he damps down his desire for the social wild child life tosses into his path.

For Ivo Rogers, life revolves around two things—his family and 415 Ink, the tattoo shop he co-owns with his four brothers. His family might be stitched together by their battle scars from growing up in foster care, but their brotherhood is tight—and strong enough to hold Ivo together during the times when he falls apart.

Now Ivo faces a new challenge when he falls for a cop with an old-school mentality on how a man looks and acts. Ruan is the promise of a life Ivo thought he’d never have, but their clashing perspectives threaten any chance of a relationship. Being the family’s hellion makes it easy to be misunderstood, yet Ivo has faith Ruan will not only embrace who he is but love him as well.

Review:  Imagine growing up in and out of foster care and being taken away from your only family. Imagine that family fighting so hard to get you back, so you pretend to be someone you’re not for a long time and the only thing to get you through is your art. That’s Ivo.

Ruan is a by the book police officer. He’s gay and knows it, but he’s not out and proud like Ivo is.

Ivo is a gender bending kind of guy. He gives absolutely no forks about what people think about him, except for his big “brothers”, especially Bear.

This story just reinforced my love for Ivo. I loved way he wouldn’t back down to Ruan and wouldn’t change himself, except his shoes while tattooing. I also loved how Ruan actually took the time to reflect and didn’t just tell Ivo what he wanted to hear. That’s about as adult as you can get.

A lot of this story was about Ruan coming to terms with himself. He grew so much from when we first met him and it was real. Ruan was true to himself as well throughout this entire book. I loved his relationship with his landlord. I loved his cat, Spot.

There were times when I wanted to strangle Ivo’s brothers. I hate meddling family and this was borderline. Ivo is an adult and even though he’s the youngest he’s still an adult and can communicate and had them this. It hurt me because it felt like his family didn’t trust Ivo.