Title: Take the Edge Off

Blurb: You don’t end up a 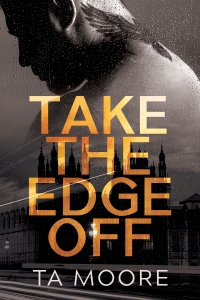 Cal has always been the bad boy lovers don’t bring home to Mom, but now he’d like someone other than a debt collector waiting for him at home. He has a legit job as a driver with his brother’s company, he’s got a doctor on the hook, and he still can’t help crawling into bed with Joseph Bailey.

Joe has never met anyone as easy in their own skin as his new driver. Or as ridiculously beautiful. He’s in London to downsize the family business… and to investigate the abusive emails that imply a dark secret around his mother’s death. But unpicking the lies he’s been told makes Joe realize he isn’t sure who is without them.

When his life falls apart, the only person he can be himself with is Cal. But with the anonymous stalker’s threats increasing, Joe worries that someone will finish the job they started over two decades ago—and end any chance for a happy future between him and Cal.

First of all, thank you so much for having me! I’m thrilled to be here with my new contemporary romance Take the Edge Off.

One of the main characters in Take the Edge Off is a professional driver, and ex-semi-professional car thief. So inspired by that (and by the fact that a friend of mine’s husband chants ‘I’m a bus, I’m a bus, I’m a big red bus’ whenever he ends up in a bus lane) I am going to answer a question that I know you’re all dying to know the answer to: What would these characters be life if they were cars?

El Tate is, by any standard, the good Tate brother. The responsible one. Everything that he was expected to do, he did. He took care of his mum, he took care of his little brother, he joined the military, and he married his childhood sweetheart. All the boxes dutifully ticked.

Except it was just a relay race of avoidance as he passed the buck from one thing to the next. He let his mom leave, he joined up to get away from the responsibility of his little brother, and he married his girlfriend because…because he loved her. And because if he loved her then he didn’t have to worry about how he felt about the other squaddies or his kid brother’s asshole boyfriend.

Except ever responsibility he ticked off and then tried to dodge, came back to bite him in the ass. His mum left, his little brother nearly got himself killed (not even because of the asshole ex, just because shit happens), and his marriage imploded without El actually doing anything wrong. So now he’s trying to pin down a life that isn’t based on dodging the stuff you don’t want to deal with.

He’s taken his Grandad’s dubious list of crooked contacts and nice cars and turned it into a legit business. His brother has a job. His wife doesn’t hate him, although that isn’t making the divorce cheaper or easier.

So even though El has spent his working life behind the wheel of a car, he’d not be one. Because El runs. He runs away from things, he runs to burn off the energy he’d use to avoid his problems. So he’d be a pair of sneakers. Nice ones, well-fitted and personalised to his feet — because he can afford them and for a lot of his life he couldn’t — but worn and grubby because he still wants to get his money’s worth out of them.

TA Moore is a Northern Irish writer of romantic suspense, urban fantasy, and contemporary romance novels. A childhood in a rural, seaside town fostered in her a suspicious nature, a love of mystery, and a streak of black humour a mile wide. As her grandmother always said, ‘she’d laugh at a bad thing that one’, mind you, that was the pot calling the kettle black. TA Moore studied History, Irish mythology, English at University, mostly because she has always loved a good story. She has worked as a journalist, a finance manager, and in the arts sectors before she finally gave in to a lifelong desire to write.

Coffee, Doc Marten boots, and good friends are the essential things in life. Spiders, mayo, and heels are to be avoided.

One thought on “Guest Post & Giveaway: Take The Edge Off by TA Moore”