Hello, everyone! I’m C.S. Poe and we are at the fourth stop of The Mystery of the Moving Image blog tour. This is the third book in my mystery-romance series, Snow & Winter, and this tour includes the continuation of my exclusive coda. Poor Sebastian and Calvin are desperate to find an apartment, as established in Book Two, The Mystery of the Curiosities.

Please also enter the giveaway. I have five really gorgeous postcards in the theme of Buster Keaton, a silent film star and Sebastian’s Hollywood crush. This is a direct tie to the concept of Book Three.

Please enjoy Part 4 of my coda.

“I’ve been searching for two months, Cal,” I protested while shifting on his bed, back against the wall to make room. “How can the best we find be the five foot, eleven inch tall basement cave?”

Calvin snapped his fingers at Dillon and the dog jumped off the foot of the bed. He climbed in, wrapped his arm around me, and pulled me against his chest.

“I mean—I get it,” I continued, mumbling against his warm skin. “It took a bomb to get me out of my perfect apartment. But still. Still. This is killing me.”

“I know, sweetheart.” Calvin combed his fingers through my hair and massaged my neck.

I raised my head and rested my chin on his pec. “What’re we going to do?”

I rolled my eyes, although he probably didn’t see in the dark. “I just want to have an apartment where my neighbors aren’t weirder than me, where my darling father won’t walk in on us getting frisky, and if I fall out of bed I’m not already in the kitchen.”

Calvin’s chest rumbled with a low laugh. “Be patient. Something will open up.”

“Filthy liar,” I muttered. “Don’t you want to have a new home with me?”

“Home is anywhere you are.”

Calvin chuckled again. He tugged me up, put a hand on the back of my head once more, and brought me down into a kiss. “Do you not want me to be romantic?” he whispered.

“Now, I didn’t say that….” I kissed his gentle mouth a few times before biting Calvin’s neck.

Calvin growled in response. He moved his hands down my body and hoisted me up to straddle his hips. He slid his hands into my pajama pants and kneaded my ass. “Want to fuck?”

Calvin sat up abruptly. He brought his hands up, moved them underneath my T-shirt, and yanked it over my head. He tossed it across the room before kissing me again. “If I had to go one more day without you, I was afraid we’d have to resort to phone sex.”

I laughed at that and draped my arms around his neck. “I’d sooner play an X-rated game of Monopoly than have phone sex.”

“I owe you two grand? And here I’ve already lost the shirt off my back.”

“I’ll accept an IOU and your pants,” he said.

“You drive a hard bargain.”

I woke up to Dillon barking that happy puppy bark dogs do when they know there’s a walk and some peeing on trees in their immediate future. Calvin shushed him in response. I rolled over, grabbed the spare pillow, and inhaled wisps of Calvin’s cologne in the fabric. I nearly fell asleep again with the comforting scent close by, before I realized I was in the bed alone.

I raised my head, rubbed my eyes a bit, and looked across the room at the blurry gray blob near the kitchen counter. “Are you buying a can of Folgers or going to Starbucks?”

“House brew with cream,” he replied. “I know what you like.”

That gave me a weird feeling in my gut to hear Calvin say. Like—holy shit it’s serious love when your guy knows coffee particulars.

And this perfect man was honest to God going to move in with me?

I knew from the start that Calvin would have his name on the apartment lease alongside mine, but it was like the reality—the gravity of our impending future together—only just occurred to me.

I was going to move in with my boyfriend soon.

I sat up, shaking my head. I was not awake enough to reflect on these uncomfortable emotions.

I looked up, although it’s not like Calvin was any more clear. “What? No, nothing. I only asked because if it was Starbucks, I’ll get clothes on and come with.”

“Make it snappy. Dillon’s about to wag his butt off,” Calvin said by way of answering. 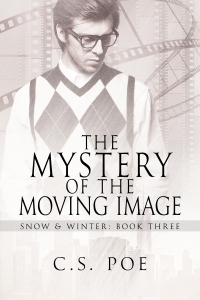 Blurb: It’s summer in New York City, and antique shop owner Sebastian Snow is taking the next big step in his relationship with NYPD homicide detective, Calvin Winter: they’re moving in together. What should have been a wonderful week of playing house and celebrating Calvin’s birthday comes to an abrupt end when a mysterious package arrives at the Emporium.

Inside is a Thomas Edison Kinetoscope, a movie viewer from the nineteenth century, invented by the grandfather of modern cinema, W. K. L. Dickson. And along with it, footage of a murder that took place over a hundred years ago.

Sebastian resists the urge to start sleuthing, even if the culprit is long dead and there’s no apparent danger. But break-ins at the Emporium, a robbery, and dead bodies aren’t as easy to ignore, and Sebastian soon realizes that the century-old murder will lead him to a modern-day killer.

However, even with Sebastian’s vast knowledge of Victorian America and his unrelenting perseverance in the face of danger, this may be the one mystery he won’t survive.

She is a reluctant mover and has called many places home in her lifetime. C.S. has lived in New York City, Key West, and Ibaraki, Japan, to name a few. She misses the cleanliness, convenience, and limited-edition gachapon of Japan, but she was never very good at riding bikes to get around.

​She has an affinity for all things cute and colorful and a major weakness for toys. C.S. is an avid fan of coffee, reading, and cats. She’s rescued two cats—Milo and Kasper do their best on a daily basis to sidetrack her from work.

C.S. is a member of the International Thriller Writers organization.

Her debut novel, The Mystery of Nevermore, was published by DSP Publications, 2016.

One winner will be randomly chosen by C.S. Poe

4 thoughts on “Blog Tour & Giveaway: The Mystery of the Moving Image by CS Poe”