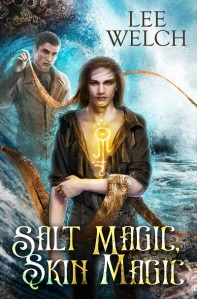 Blurb:  Lord Thornby has been trapped on his father’s isolated Yorkshire estate for a year. There are no bars or chains; he simply can’t leave. His sanity is starting to fray. When industrial magician John Blake arrives to investigate a case of witchcraft, he finds the peculiar, arrogant Thornby as alarming as he is attractive. John soon finds himself caught up in a dark fairytale, where all the rules of magic—and love—are changed.

To set Thornby free, both men must face life-changing truths—and John must accept that the brave, witty man who’s winning his heart may also be about to break it. Can they escape a web of magic that’s as perilous as love?

Review:  John Blake had immediate regrets when he tried to pull Lord Thornby free of Thornby’s father’s estate. Things were not as Blake first thought. Including Thornby. Blake is visiting at the behest of a friend to try to figure out what is going on. Things are not right, Thornby’s father is spending money on islands manically, and Thornby himself dresses, shall we say, eccentrically. There’s other things that aren’t right. There’s a whole lot of magic in the old house. There’s also magic that doesn’t affect Thornby like it should. There was also that little interlude with the faries. What Blake really didn’t expect was how truly evil Thornby’s father would turn out to be.

I absolutely loved the first three fourths of this book. Probably more like five sixths, even. Then the great reveal and denouement left me sort of flat. Honestly I wish it had been reversed and I had ended this on a high, because the bulk of the book was damn good. As it was I ended up deeply engaged with the book then getting to the climax and thinking, “That’s it?” I don’t know if I expected Soren to somehow be way more stunning than he was, or what. I just wasn’t thrilled with what I got.

So I didn’t love the ending but one of the most compelling things happened in the end. Soren’s dad is really quite horrible, but you finally understand the crazy. He’s evil and deeply pathetic. He created all his own problems, but he had something mortals were never meant to have. Mortals weren’t meant to shrug off that level of temptation. Would John be able to shrug it off? Would he be driven to crazier and crazier acts in an attempt to get Soren back? Or someone like Soren? Of course the best questions are the unanswered questions. We have to believe John can trust in ways Soren’s father couldn’t.