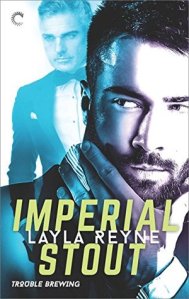 Blurb: It’s a good thing assistant US attorney Dominic Price co-owns a brewery. He could use a cold one. Nic’s star witness has just been kidnapped, his joint operation with the FBI is in jeopardy, his father’s shady past is catching up with him and the hot new special agent in San Francisco is the kind of distraction best handled with a stiff drink.

Kidnap and rescue expert Cameron Byrne has his own ideas about how to handle Nic, but his skills are currently needed elsewhere. The by-the-book FBI agent goes deep undercover as a member of an infamous heist crew in order to save Nic’s witness, break up the crew and close the case before anyone else gets hurt. Nic in particular.

Things heat up when Cam falls for Nic, and the witness falls for Cam. As the crew’s suspicions grow, Cam must decide how far he’s willing to go—and how far into his own dark past he’s willing to dive—to get everyone out alive.

Review: Cam Byrne and Nic Price were on a collision course. There was no way some sort of relationship wasn’t going to happen. Of course the unavoidable starts to happen when life gets troublesome for both men. Nic’s got some people threatening him and Cam has to go undercover. Danger makes the heart grow fonder, apparently. That and while undercover Cam does a bit of pretend canoodling with a witness and Nic finds himself ridiculously jealous. Additionally, when it rains bullets it also pours emotions both Nic and Cam had thought they buried well enough they’d be able to deal with them another day. They may be able to catch the bad guy and save the stolen goods, but keeping the past in the past isn’t as easy.

I really enjoyed this book. Honestly, I think I’ve really enjoyed every book I’ve read by Layla Reyne even when things drive me crazy. Additionally, nothing here drove me crazy. That’s a total win win. I also really like both Nic and Cam. I think it’s impressive I like Nic, honestly. I kinda sorta hated him quite a bit when Aidan was using him to not fall in love with Jamie. Yes, that’s unfair, but Jamie was hurt! Anyway, I enjoyed both Nic and Cam as characters and like them together. I like that they’re both trying to atone for past mistakes. We know Cam’s mistake whereas Nic’s is still a mystery.

As much as I enjoyed this book I’m not quite as engaged as I was with the Agents Irish and Whiskey books. That doesn’t mean I’m not eager for the next book. I’m just not as overwhelmingly eager. Possibly some of that stems from my dislike of their relationship progression being phrased as a legal argument, or it could just be I’m not into the groove yet. I dunno. Maybe it’s because for the bulk of this book these guys are deliberately holding back. More correctly they’re holding back for all of the book. The holding back definitely makes me want to read the next book. When are they going to really be honest with themselves and those around them, and what will happen when they are?

It’s possible to pick this book up and start it without having read the Agents Irish and Whiskey series, but I would really recommend you read the other books first. There’s a lot of exposition and character building that is already known. You may have a wonderful reading experience picking up here, but I feel it would be a much more nuanced reading experience if you read these books in order.