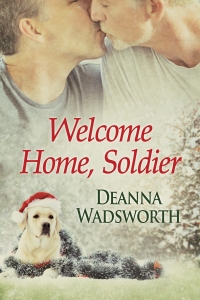 Blurb:  Clay and Daniel fell in love as enlisted men during Desert Shield, but Don’t Ask Don’t Tell meant they had to keep it secret. After Clay’s convoy was ambushed, PTSD changed him, and their relationship ended in a horrible fight on Christmas Eve.

Twenty-five years later, they’ve reconnected on Facebook, and Clay finds out Daniel will be alone on Christmas Eve. Impulsively, he sets out for Daniel’s hometown of Gilead, Ohio—where Daniel is now the mayor—to surprise him with a visit. But a blizzard strikes and Clay wrecks his car. All hope of seeing Daniel is lost—until a mysterious old man named Nick offers Clay a ride.

The weight of past wounds and the scars of war might make their reunion awkward, but Clay is willing to take the risk to win back his lost love. Despite a lifetime of disappointing holidays, Clay hopes that this soldier is finally coming home for Christmas.

A story from the Dreamspinner Press 2017 Advent Calendar “Stocking Stuffers.”

Review: I’m a fan of Wadworth’s work, most of the time. Her writing is descriptive without being too wordy and I love that. However, I think I needed this to be a lot longer. I just couldn’t get on board with the 25 year time gap.

Clay and Daniel met and fell in love at 18 and 20 in the military. Don’t Ask Don’t Tell was in full effect and they had to keep it under wraps. Clay wanted out and to live life, but Daniel was too afraid and Clay left. Daniel went on in the military while Clay found drugs and alcohol.

Clean now, Clay is a drifter. He’s older but with no real home, no one to care for him if he’s gone. Daniel got married to a woman and had a child. Now divorced and an out of the closet bisexual, Daniel is the mayor of his hometown.

Clay and Daniel reconnect on Facebook, but it’s not a constant communication. Clay finds out that Daniel is going to be all alone for Christmas and immediately takes off in the middle of a blizzard to be with him. Who does that?

This is where I have issues. Are they really going to act like nothing happened? Dance around the big issue? Are they going to pretend like 25 years hadn’t passed? Get out of here. No one is the same person they were when they were 18-20 years old. I found myself rolling my eyes quite a bit and I hated it. I wanted to love this story, but I couldn’t.

I will say that I’m going to read more of The Men from Gilead series. I think Welcome Home, Solider could have been great, if we had more time with Clay and Daniel.