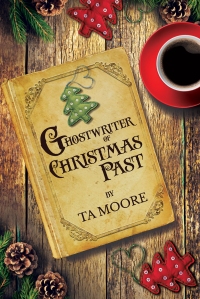 Blurb:  Ever since ghostwriter Jason Burke ended up in loco parentis for his orphaned niece, Mallory, he’s been trying. He goes to parent/teacher events, and he makes packed lunches, so he definitely didn’t mean to forget about Christmas. He just hasn’t celebrated it since he left home under a cloud years ago.

Put on the spot, Jason makes the snap decision to take Mallory to see where he and her father spent their Christmases as kids. The last thing he expects is to run into Tommy, his ex—ex-best friend, ex-boyfriend—who is still living in town… and working as a sheriff’s deputy.

It’s hard to avoid someone in a small town—and maybe Jason doesn’t want to. He got Mallory a Christmas, and maybe now it’s time to get himself a Christmas boyfriend. But first, he owes Tommy some explanations.

A story from the Dreamspinner Press 2017 Advent Calendar “Stocking Stuffers.”

Review: Jason knows he needs to step it up for Christmas. He’s the guardian of his niece whose parents recently died. She needs something more. He decides to take her back to the home he grew up in to spend a Christmas in the home he grew up in. Things of course don’t go as planned. Their first night he crashes their car. Their savior is no other than his boyhood best friend and love of his life Tommy. Tommy continues to save them by letting them stay with him. Jason keeps meaning to leave but nostalgia and a little angsty coaxing from his niece keep them together for the holidays. Reigniting their old flame is inevitable

I really liked all the characters in this book. It feels like it’s a quicky love story but they do have a lot of history. It’s probably not fair to the story but I would have loved it this was a full length book. The town and all the bad blood between the characters could have really gave this book some depth. As it was I liked it but I wasn’t drawn in like I wanted. It’s a charming read and one of the better ones I read this year. Definitely worth picking up. I’m a big fan of this author.