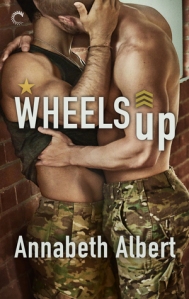 Blurb:  Their love is forbidden, but their hearts aren’t listening to rules and regulations.

Lieutenant Dustin Strauss is a reformed man. No longer a twentysomething hell-raiser, he’s his SEAL team’s new XO-and a man with a secret. Or seven. He’s kept his bisexual identity under wraps for years, along with his kinky side and a fondness for the military-themed semianonymous hookup website Joe4Joe. His latest chat buddy is more than a sexy online distraction-they’re taking their very not-safe-for-work relationship into real time.

Petty Officer Wes Lowe has a smart mouth, a take-charge attitude and an uncanny ability for making things go boom. The life of an enlisted man isn’t always enough to satisfy him, but one wild, no-questions-asked weekend with his online love comes close. When a transfer order comes in, Wes feels ready and centered. He’ll make a good impression on his new SEAL team and keep his growing feelings for Dustin on the down low.

But as they log more time online and some very real emotions surface, Dustin and Wes struggle to pretend they’re just a harmless fling. And when his commander introduces Dustin to his team’s newest member, they’re in for the shock of a lifetime…and a crushing disappointment: their difference in ranks means even a friendship without sexual contact could end their navy careers for good.

With their hearts on the line, Dustin and Wes may not survive their next mission, let alone find a way toward a future together.

Review:  Let me start off by saying that I’ve only read the first book in this series and didn’t continue on. I probably should have gone back and read the previous books, but I didn’t feel like I lost anything by not reading the others. This can be read as a standalone.

I struggle with this one for a couple of reasons and one being that I was kind of bored. Don’t shoot me! Dustin and Wes meet online in a military themed app called Joe4Joe. They never show faces, no real names, and no “real” info about who they really are. That said, they quickly become friends by actually talking instead of strictly having cybersex. Wes tells Dustin about his sister, Dustin tells Wes about how he’s struggling with being bi. They talk behind the computers and I loved it, even though we never really see them getting to that deep connection they have. I missed that and I wanted to see those chats.

When this starts out Dustin is on a plane to DC and Wes wants to meet face to face. After 6 months of talking only online and with the chance of getting caught looming Dustin is resistant. Can you blame him?

Well, you guessed it. He takes the chance and it’s amazing. Then things take a turn and it became repetitive and boring. Yes, Dustin is still in closet with everybody. Yes, if they get caught they’ll be court martialed. Yes, they don’t want to stop seeing each other. Well buck up and take the hit then and quit complaining and whining about it. I wanted to knock them both upside the head.

I think that if this had something MORE in it that wasn’t the same I could have enjoyed it more. I needed something other than the repetition that was happening.

Overall, for me, it was just meh.