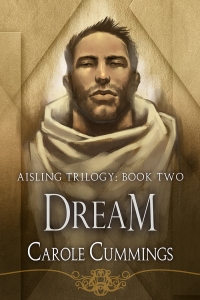 Type: Novel in a triology

Blurb: To reveal the intricate machinations threatening them, two men must learn to trust each other. But how can they, when their hearts and minds—their realities—are subject to manipulation?

When he set out to escort the prisoner Wilfred Calder back to Putnam, Constable Dallin Brayden didn’t anticipate the political betrayal and malicious magic threatening their lives at every turn. To his surprise, he slips into the role of protector—and it’s more than duty compelling him to ensure Wil’s safety as they’re haunted by strange dreams.  But does Wil dare put himself in the hands of a man he believes wants him dead?

Wil’s past weighs heavily on him, tainting his perceptions as he struggles his way through a tangle of lies. With both will and magic as his weapons, he fights desperately for survival—and his soul. For the Aisling is coveted by more than the Guild and the Brethren; ancient gods and soul-eating spirits also want what lives within him. His only chance might be Dallin and his goddess, the Mother, who Wil has been taught to despise above all others.

Review: This felt like a middle book to a trilogy. We learn a lot in this book but there’s obviously so much more to come. Some things come full circle and then new paths are set. We finally learn what Dallin and Wil truly are. There’s much more to figure out though so don’t think it ends here. The ending feels very much like a cliffhanger. They do battle one of their foes in this book but the journey and fight are far from over. We’ve yet to realize just what’s waiting for them. Wil and Dallin know they have to face much more before the end.

The good thing is they have each other now which is more than Wil has ever had. The guys are on the run for the entirety of this book. This forces their friendship, trust and feelings to escalate. Wil is still working on letting his defenses down. He also has to let go of lies he’s been brainwashed into believing are real. Dallin is a rock. He’s pledged to give his life if needed for Wil. He hopes it doesn’t come to either of their deaths but the danger is real and around every corner. Together they both are forced to face their destinies and embrace the gifts or burdens depending how you look at it.

We meet some interesting characters in this book. Wil and Dallin are backed into a corner and have to try and accept help at times. I found myself skeptical of everyone just as Wil would be. Although the guys are in constant danger this book was a bit slower paced IMO. There’s a lot of conversations between Wil and Dallin which are necessary. There is quite a bit of action at times also. I’m really looking forward to the next book. I can’t say I completely understand what’s happening but I have a pretty good idea. I’m looking forward to all the pieces coming together.