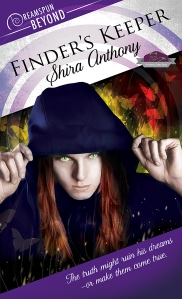 Blurb:  The truth might ruin his dreams—or make them come true.

When Zane moves into an old gothic brownstone, he discovers the house comes equipped with a caretaker—Kit, who lives in the basement. Zane is immediately drawn to the charming and attractive Kit. But Kit is much more than he seems. He is a two-hundred-year-old half-human, half–red-fox spirit who guards a Gate between the mortal and spirit worlds—a fact Zane should recognize, but doesn’t.

Orphaned at a young age, Zane never learned he comes from a long line of mystical Keepers. Kit needs Zane’s help to protect the Gate, but how can he tell Zane of his legacy when that will crush Zane’s dreams of traveling the world? If he takes up the mantle, Zane will be bound to the Gate, unable to leave it. But when Zane realizes Kit’s true nature, and his own, he’ll have to make a choice—fight to protect Kit and the Gate, or deny his destiny and any chance of a future with Kit.

Review:  I knew going in this was part of the Dreamspun Beyond series which tends to be fairly sweet and it definitely was. Both of the MCs are pretty adorable. Kit looks like a fox in his true form but is able to use his magic to glamour Zane when he moves in as not to shock him right away. He has been weakened by his lack of Keeper. A sort of magical battery for the Guardian of the gate between worlds. Kit longs to connect with Zane but he doesn’t want to force him into a life where he can’t venture far from the gates. Kit spends much of the book struggling with this and his weakened state.

Zane and his sister were orphaned at a young age. He’s always felt a strong need to belong. When he finally quits resisting the pull to go to his deceased uncle’s house he gets a sense of finally finding his place to call home. Of course he doesn’t understand the full reason. That he comes from a long line of Keepers and he’s found his Guardian. There is an insta love/attraction their situation benefits. It’s more than just that they like each other. They’re connected. I think this helped me with how quickly the guys fall for each other since I’m not a huge fan of it. It works.

Kit is a bit of a martyr in this book but a totally likable one. Zane takes all the magical realizations his comes to learn about in stride. Just accepts it because it feels right. The love story was sweet. The world created was interesting but not too in depth. This was a pretty light read. Maybe a tad sweet for my liking but there were some interesting characters and the magical elements helped. If you like a romance heavy paranormal you might like this one.