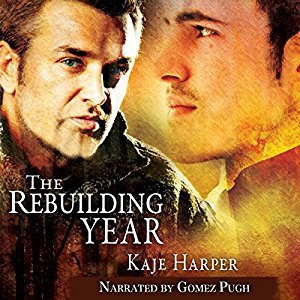 Blurb:  Losing nearly everything leaves room for the one thing they can’t live without.

A few excruciating minutes pinned in a burning building cost Ryan Ward his job as a firefighter, the easy camaraderie of his coworkers, his girlfriend, and damn near cost him his left leg. Giving up, though, isn’t an option. Compared to the alternative, choosing a new profession, going back to school, and renting a room from the college groundskeeper are simple.

Until he realizes he’s falling in love with his housemate, and things take a turn for the complicated.

John Barrett knows about loss. After moving twice to stay in touch with his kids, he could only watch as his ex-wife whisked them away to California. Offering Ryan a room seems better than rattling around the empty house, but as casual friendship moves to something more, and a firestorm of emotions ignites, the big old house feels like tight quarters.

It’s nothing they can’t learn to navigate, though. But when dead bodies start turning up on campus—and one of the guys is a suspect—their first taste of real love could go up in smoke.

Product Warnings: Contains two hot men wrestling with a shift in their sexuality, as well as a few positions probably listed in the Gay Kama Sutra. But it’s not all about the hot and sweaty—especially when your previously straight life knocks on the door and comes back to visit.

Review: This is a story I absolutely adore, and I couldn’t wait to experience Gomez Pugh performing it. Unsurprisingly, his stellar narration enhanced this favorite and brought it to new heights. Believe me, I don’t apply such praise lightly when it comes to narration of one of my coveted favorite stories! Audio fans, you don’t want to miss this one.

After nearly ten years of reading MM, this is a story that has truly stuck with me. There’s no big thriller aspect to it (although there is a bit of a mystery), no playing games, no backing down on the part of the characters. What there is – in large helpings – is life and love. It’s a character driven story featuring John and Ryan. John, being the older of the pair, is divorced with two teenage children. Ryan is in medical school, after his first career as firefighter ended due to an injury. Both men are actually fairly quiet, easy-going, and have hidden depths. Don’t ask me to choose a favorite – it’s impossible. I really connected to them both. From the initial meeting of these men on the campus where John is head groundskeeper, there is a palpable air of ease between them. A feeling of comfort, of rightness. As their friendship evolves, it makes perfect sense for Ryan to rent a room in John’s big, lonely house. John’s kids live in California with their mom after all, not there in Wisconsin, so there is plenty of room. John could use the money, Ryan could use the quiet.

I appreciate so much how well these two men just fit. Each had been through very profound and painful incidents that left them scarred and wary. They empathized with one another. Though neither had ever been involved with a man, they were exactly what the other needed, even though the attraction caught them both by surprise. Kaje Harper handles the romantic and sexual attraction between the two men beautifully. There is no mistaking the feelings of love growing between the two before they ever even engage in a kiss. And man, is that first kiss one for the books. Sweet, earnest, heartfelt craving.

John had only ever been involved with his ex-wife, and Ryan, well he had taken advantage of the ready supply of ladies wanting to be with a fireman. Finding themselves in a relationship together rattled their cages a bit, but I love how they never truly wavered about their feelings. They were committed and they were determined. Sure they ran into obstacles with John’s kids, especially his son – who was having issues of his own – but they worked through them all as a team. Ryan is so amazing with John’s son. Their interactions are raw, poignant and no punches pulled. As this story ends, Ryan still needs to break the news to his family – that occurs in book two, also handled realistically, somewhat painfully, yet beautifully. In this first book there are also some mysterious happenings on campus that involve John, Ryan, and John’s son at different points throughout the story. The instances all dovetail to lead to an exciting climax to the story. This event helps to solidify the relationships even more. If you are looking for a well-written, engaging, character-driven story – look no further. If you want to experience it in audio form, you can do no better than this sterling performance by Gomez Pugh.