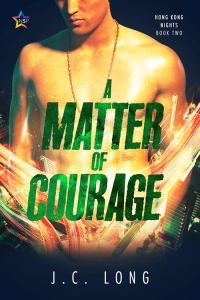 Blurb: Winston Chang has spent much of his young life admiring the Dragons who have kept his area safe and fought off the gangs that would bring violence to their area. Now that he’s an adult, he wants nothing more than to join the Dragons and live up to those standards.

The opportunity presents itself when his passion and knowledge of cars is just what the Dragons need. One of their own has been killed and his death seems linked to his involvement with the illegal racing scene known as the Dark Streets. Winston is needed to infiltrate the scene and find out who is responsible and why.

Will Winston and Steel be able to find the courage to face not only the unknown killer stalking the Dark Streets racers but also their growing feelings?

Review:  I loved the first book in this series. A Matter of Courage takes us back to the streets of Hong Kong with the Dragons. The Dragons are a gang but the good kind. The kind that watches over their turf and it’s people without all the illegal dealings of the other other gangs utilize to keep power. So they’re the good guys! This book features Winston the younger wannabe Dragon from the first book and his best friend Steel. It’s very much a best friend to lovers story. I found it to be extremely angsty. Some people may love this but I missed the gritty dangerous feel of the first book. There’s danger and murder but it lacked the intensity and desperation to catch the killers I liked so much in the first book. People died. They tried to solve it by going undercover in illegal street races. It was secondary to the romance for sure. The guys came across as really young to me. Both over react frequently and can’t admit their feelings. They don’t give off the smart tough guy vibe I get from all the other characters from the Dragon organization. They are flawed but likable however. Just don’t expect anything like Noah and Wei. Where Noah and Wei had amazing sexual tension, Steel and Winston had angst. The murder mystery was the most interesting part to me but ultimately fell kind of flat. I like the behind the scenes scheming of the rival villains but this one ended up being kind of uneventful to me.

Winston is VERY angry at his uncle Detective Hong. I get where he’s coming from. I do. But he flies off the handle over and over when it comes to Hong. He won’t listen to reason or keep himself under control despite everyone asking him to. For someone trying so hard to prove he’s not a kid and ready to officially be a Dragon he can’t control himself on this issue. For me a little of this would have gone a long way. His reactions every time Hong is even mentioned just made him feel immature to me. Nobody can even have a conversation with him about it without him losing it. Not even when they’re trying to solve murders. There is some resolution to this drama thank goodness. Steel came from an awful upbringing. Luck brought him to Winston’s family who were ultimately his savior from a very bad life. Through them he found the Dragons. Steel is terrified that if he takes a chance with Winston he will lose everything. His emotional struggle was understandable. He doesn’t want to hurt Winston or risk their friendship. He’s totally fine with randomly hooking up with Winston however. Steel had moments I wanted to smack him too. The guys do some growing up and facing their problems in the book. Despite the frustrating MCs I did like this book. I enjoy the world created in this series. The power struggles between the gangs and the corruption within the Police Department keep me intrigued. Honestly it might be unfair to try to compare this and future couples to Wei and Noah but I couldn’t help it. Like I said before. I missed the dark gritty intensity the first book had.