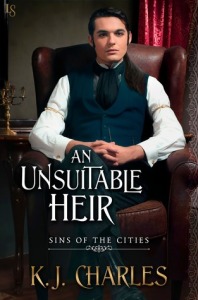 Blurb:  A private detective finds passion, danger, and the love of a lifetime when he hunts down a lost earl in Victorian London.

On the trail of an aristocrat’s secret son, enquiry agent Mark Braglewicz finds his quarry in a music hall, performing as a trapeze artist with his twin sister. Graceful, beautiful, elusive, and strong, Pen Starling is like nobody Mark’s ever met—and everything he’s ever wanted. But the long-haired acrobat has an earldom and a fortune to claim.

Pen doesn’t want to live as any sort of man, least of all a nobleman. The thought of being wealthy, titled, and always in the public eye is horrifying. He likes his life now—his days on the trapeze, his nights with Mark. And he won’t be pushed into taking a title that would destroy his soul.

But there’s a killer stalking London’s foggy streets, and more lives than just Pen’s are at risk. Mark decides he must force the reluctant heir from music hall to manor house, to save Pen’s neck. Betrayed by the one man he thought he could trust, Pen never wants to see his lover again. But when the killer comes after him, Pen must find a way to forgive—or he might not live long enough for Mark to make amends.

Review:  This is the third book in a series, and while it could be read as a standalone, I really advise against it. In my opinion there is too much backstory to enjoy and be aware of in the previous two books to even consider skipping them, or reading out of order. Read them first in order to glean a full appreciation of this one! *This review does contain references to the first two books.

KJ Charles is masterful at forming brilliant characters and having them develop as her stories unfurl. This book features enquiry agent Mark and trapeze artist – soon to find out he is an earl – Pen. The colorful, vivacious Pen is undoubtedly designed to be the shining star of this book, but for me it was Mark. Mark is portrayed as one of the kindest, easiest going, accepting and stand-up people one would ever hope to meet. He’s a fair-minded and non-judgmental and brimming with so much of himself to give. Being as he was born with one arm ending at a stump around the elbow, Mark could easily have looked down on life, but instead he embraced it and all it had to offer, never feeling disadvantaged or inferior. His attitude extended to those he chose to bed – he considered that he was bedding a person and not a gender. Pen lived for the stage, the carefree existence of being a performer fit with his unease at melding with societal constraints of gender, of acceptable appearances. His long hair, penchant for painting his face, and fluctuation between feeling (and dressing) masculine, feminine, or some combination uniquely Pen, left him wary of making new acquaintances. Of course given Mark’s personality and tastes, meeting Pen was like winning the lottery.

The setup in An Unnatural Vice and An Unseen Attraction was of course the discovery that an heir, the rightful Earl of Moreton, was still alive, but someone was killing people to keep this news quiet. Toward the end of An Unseen Attraction it became clear that said heir would be Pen, and I delighted in how delicious this was going to be to watch play out, since Pen is… well, Pen. The beginning of this story, during which Mark had to decide how to approach Pen and his twin sister Greta with the news of their heritage, was completely absorbing. I was engrossed in watching Mark become entranced by Pen, in learning of Pen’s individuality, uncertainties and need for wariness. Pen letting his guard down and trusting in Mark was beautiful to behold. KJ Charles worked marvelous depictions of pansexual, non-binary people.

Once the story got down to the nitty gritty of Pen and Greta being pretty much forced to face up to the earldom – including all the murders, mayhem, jealousy and other nefarious goings on surrounding it – I found my interest waning.. I certainly wanted to know who had been murdering people, would Clem get his fair shake, and would Greta get her wish of a secure future while Pen kept his anonymity – and Mark. The details and circumstances leading to the eventual outcome simply fell short of gripping.

The eventual outcome, how Pen as the completely reluctant heir to the earldom would be to be able to go on living his authentic life, did play out ingeniously. I only wish the route there had been as page turning as the first third of the book and indeed the first two books in the series. It was very gratifying to see all the characters come together to the outcome, and see how they all ended up faring. I was particularly happy with all moments during which Clem and/or Justin appeared in scenes. 

This book and series are wonderful examples of meticulously researched and marvelously inclusive historical fiction. KJ can certainly turn a phrase and concoct brilliant solutions like no other. She has created another cast of unforgettable characters here. I love her play on words with the titles: An Unsuitable Heir could be interpreted as Pen being not of appropriate character or who knows what clothes Pen will be wearing today. 