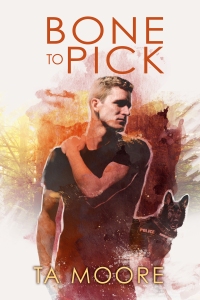 Blurb: Cloister Witte is a man with a dark past and a cute dog. He’s happy to talk about the dog all day, but after growing up in the shadow of a missing brother, a deadbeat dad, and a criminal stepfather, he’d rather leave the past back in Montana. These days he’s a K-9 officer in the San Diego County Sheriff’s Department and pays a tithe to his ghosts by doing what no one was able to do for his brother—find the missing and bring them home.

He’s good at solving difficult mysteries. The dog is even better.

This time the missing person is a ten-year-old boy who walked into the woods in the middle of the night and didn’t come back. With the antagonistic help of distractingly handsome FBI agent Javi Merlo, it quickly becomes clear that Drew Hartley didn’t run away. He was taken, and the evidence implies he’s not the kidnapper’s first victim. As the search intensifies, old grudges and tragedies are pulled into the light of day. But with each clue they uncover, it looks less and less likely that Drew will be found alive.

Review: I wanted to like this one much more than I did. The BIG problem for me was that one of the MCs, Javi, was a jerk. I do not mind an unlikable character who grows or slowly takes a turn for the better. Javi’s character was too much. He was rude the entire book. Even after he’s sleeping with the other MC, Cloister. Cloister is the opposite. Cloister is a good guy. A likable guy. He’s honest and likes his job. Respects his coworkers including his partner. Javi looks down upon everyone in the town of Plenty. He’s an FBI agent who hopes his post in Plenty is limited. Cloister has a tragic past that the author doesn’t get too deeply into but it’s mentioned here and there. Cloister is a hometown boy. He’s a K-9 officer called into a missing person case. A young boy goes missing from the local hippie resort. This is where he runs into Javi again. They’ve met before and didn’t like each other much.

I really enjoyed the mystery portion of this book. There’s an ugly history with the town of Plenty. Crooked cops, corruption and poverty lead to a time when a series of bad things happen. Collectively it all comes back to haunt people. The cast of characters gets pretty long but the way it all connects was pretty intriguing. IF only Javi didn’t come along and ruin the flow with some degrading comment! He seriously made me crazy. I found myself not wanting to pick this book back up because I just knew he was going to say something awful to someone again. The thing is almost every lead they found in the missing person case came from Cloister. Who admits he’s no detective but his instincts are great. Yet Javi not only didn’t give him credit. He cuts him down at every turn. BUT he still wants to sleep with him. I didn’t even really feel any chemistry between the guys. Basically as a mystery novel this was good. As a romance don’t expect to fall for the guys. In fact I wanted Cloister to never again give Javi the time of day. Not a good thing. The book leaves off with them still “hooking up” so don’t expect a love story. If this book is the beginning of a series then a love story could happen. If so hopefully we get some backstory and redemption for Javi. All I know is Javi has a lot of growing to do as a person. I know he had something bad happen in his past too but for me thus far it doesn’t excuse what a nasty person he is. It’s rare for me that an MC manages to tarnish a good book but that’s what happened here sadly.