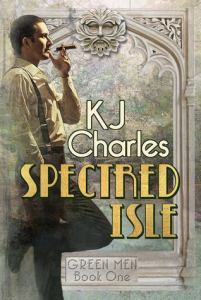 Blurb:  Archaeologist Saul Lazenby has been all but unemployable since his disgrace during the War. Now he scrapes a living working for a rich eccentric who believes in magic. Saul knows it’s a lot of nonsense…except that he begins to find himself in increasingly strange and frightening situations. And at every turn he runs into the sardonic, mysterious Randolph Glyde.

Randolph is the last of an ancient line of arcanists, commanding deep secrets and extraordinary powers as he struggles to fulfil his family duties in a war-torn world. He knows there’s something odd going on with the haunted-looking man who keeps turning up in all the wrong places. The only question for Randolph is whether Saul is victim or villain.

Saul hasn’t trusted anyone in a long time. But as the supernatural threat grows, along with the desire between them, he’ll need to believe in evasive, enraging, devastatingly attractive Randolph. Because he may be the only man who can save Saul’s life—or his soul.

Review: Saul Lazenby and Randolph Glyde keep meeting at the oddest times and oddest places. Neither man believes it to be a coincidence. Certain topics keep coming up over and over. As an archaeologist in the private employ of a rather frivolous man Saul is where his employer wants him to be. Randolph has to figure out why these men are constantly on the edge of major paranormal happenings and how can he keep England safe from what appears to be some something going on. Eventually, the paranormal aspects of his employer’s research become undeniable and Saul learns, firsthand, there is much more than he dreamed of. In the midst of everything paranormal Saul is skirting Randolph finds himself denying the march of progress for the greater good. For generations the Glyde family has served England, the land itself, in spite of current events and changing monarchs or governments. However; the Glyde family has been reduced to only Randolph. He and his friends are going to need more help.

I have mixed emotions about this book. Some things were stunning. I had tears in my eyes over a wet handkerchief. It was possibly one of the most intimate and vulnerable moments I’ve read in years. Then there was the item that saved the day, and its inclusion felt to me like an afterthought. We have this wonderful guilt and shame filled character and this giant, heavy metaphor that we’re told about in just a couple paragraphs. I’m a firm believer in both telling and showing. Not every book should be 700 pages. But I prefer to be shown the major metaphor that is the crux of a character arc and height of the climax of the book. It felt like so much lost potential on multiple levels.

I really liked both Randolph and Saul, but I think Randolph made me think a bit more. Randolph was bred for his job. He’s got all the authority of his lineage behind him. He’s also got his father’s fantastic disaster fresh in his mind. One powerful man doesn’t necessarily make the right decisions. But his father was asked to make those decisions by an elected government. The elected government that now wants Randolph safely in its fold. I deeply don’t agree with Randolph’s decisions in regards to his views on government. There’s a lot he’s failed to look at or reckon with. Or he has and I still don’t agree and that’s fine. I can sympathize with Randolph and not agree. And Randolph is sympathetic even though he tries so hard not to be. Like if he pretends enough he doesn’t care he’s the only Glyde left it won’t hurt, and he won’t be crushed by the weight of his own family history and responsibility.

This book is very good, but for me misses whatever it is that makes a book great. There’s a fair amount of exposition, but I don’t feel it hurt the story in any way. This particular book ends with as much of an HEA as is possible for two messed up veterans who are not legally able to be a couple. Some things are unresolved, and I want very much to see their resolution. Very much! I eagerly await the next installment of the Green Men series.