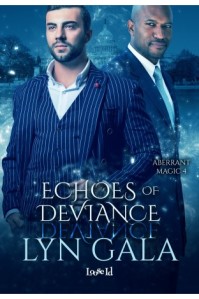 Blurb:  The FBI’s Talent team is back on the job with Kavon and Darren trying to navigate being lovers and partners in the office and at home. Without the imminent danger from magical attack hanging over their heads, Darren hopes their life together will turn out to be the happily ever after he expects. However, relationships require negotiation and compromise, and that’s difficult when the cases keep coming.

This time the team is called in when a parole officer dies at the hands of a shaman with a violent past. Local law enforcement doesn’t want federal help, and they certainly don’t want shamans involved when they blame magic for the death of one of their own. Kavon and Darren have never walked away from a case simply because they’re unpopular. Unfortunately, Kavon’s instinct to protect Darren threatens to drive a wedge between them. Darren must struggle to find his own independence without undermining the bond they share. And there’s no room for mistakes because someone wants to see the team fail on this case.

Review: An unbreakable, magical bond for Darren and Kavon hasn’t changed any of the facts of their day to day lives. They’re still on the FBI Talent team, solving crimes involving the use of magic. They’re still Agents Oberton and Boucher. A systemic mistrust of Talent has created a shortage of shamans in local law enforcement. When a parole officer is killed it’s the FBI who goes out to investigate the magical aspects of the case. To say the very least the local cops are not welcoming. Things are not as they seem. Maybe the parolee wasn’t the killer? Maybe the parole officer was dirty? Nothing is adding up. Not only is the case confusing but Kavon is having a hard time letting Darren do anything risky. Kavon is protective, but after entering a bond with Darren and their guides Kavon’s protectiveness has gone through the roof. Kavon’s tendency to overprotect is not appreciated by Darren. Particularly when Darren is right.

On some level Darren and Kavon were in love long before they entered into their relationship. Love alone does not a long term relationship make. This feels like what characters would have to go through after their HEA. Work still needs to get done. Darren and Kavon not only work together they now have to figure out the best way to manage the small details of living together and the emotional work of staying together. And it is work. Effort has to be made on everyone’s part. Darren and Kavon maybe have it easier because they can sense each other’s emotions, but who really knows? There’s no answer to this.

I’m not really sure where this is going. For the most part I remain pretty steadfast a series is only viable until the main characters are a stable couple. It’s not possible for Darren and Kavon to get more stable. But I’m still invested in what’s happening. This was still a compelling read. These guys have issues that need to be ironed out. However; I’m not sure how much longer I’ll remain interested. Are the mysteries themselves good? Yes. Are we still learning about Bennu and other Ifrit? Yes. There is a lot to keep me here for now, but I, personally, can’t see what the long term character arcs are for Darren and Kavon.

Ultimately I feel this is another strong book in this series. We got a good look at how poverty compounds the problems people with Talent have. It’s not bad enough they’re already an underclass, poverty simply exacerbates everything. We also see more vulnerability in Kavon than we have in the past. Kavon lets Darren see how much he needs him. That’s pretty damn big for the big guy. Also, I’m left really curious about the guides. Why does Kavon’s bull seem more responsive than usual while Bennu appears to be less responsive? I am certainly going to read the next installment.