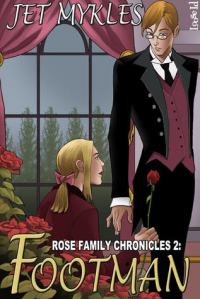 Blurb: Darien’s been on the run for two years, but when he lands unexpectedly in Rosenton, he finds to his surprise that he rather likes the theater town. And his preference has only partially to do with the place itself. Ever since meeting Christopher Faith, Darien finds himself thinking about the man. A lot!

Born to serve, Christopher Faith’s position as butler to the noble Rose family has provided him with a life that is all he ever could desire, or so he imagines. But when he meets Darien, he’s found the single thing that could make his perfect life even more sublime.

Flirtation leads quickly to love, but there’s a problem, and it’s a big one. Darien Holt is not the carefree man he appears to be. He has a secret, and hiding his true identity might destroy everything between them.

Review: Darien Holt likes Rosenton. After years of hiding and running he wants to stay in one place. One of the main attractions for Darien is Christopher Faith. Christopher likes Darien. After several random encounters in town they decide to take their mutual like to the bedroom. Both men finally get something on a sexual and emotional level they had convinced themselves they didn’t need. Darien can see Chris is deeply tied to Rosenton and service to the Rose family. His life is service. Chris knows Darien has secrets, he just doesn’t understand the gravity of them. Chris didn’t realize exactly what looking into Darien’s life would unleash.

This is unapologetic fluff. If you’ve read Jet Mykles’ Heaven Sent series these Rose Family Chronicles are a wonderful reconnection with old friends. If you haven’t, these books are still fun. Chris and Darien have to work to get an HEA, but mostly they have to work to get over their own issues. There are no titanic forces against them, and there are no major sacrifices. They end up deeply happy ever after.

For the readers of Heaven Sent, this time we get Chris and Darien from Chris’ POV as well as Darien’s. He’s still rigidly stubborn and afraid to make the last step. Chris is convinced his situation cannot be altered. And he’s still wrong. I’m glad we got to see Chris’ resignation to his fate. Chris was miserable without Darien to the point his job suffered. As crazy as it sounds it was good to see. I really liked having both POVs this time around.

This is a charming story. It’s historical-esque in an alternate universe. A stratified class system heightens the tension between the characters. Mostly though, this is a sweet romance and a fun way to visit old friends.