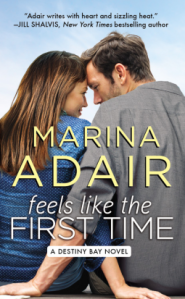 There are a lot of things Ali Marshal doesn’t do: pink anything, a day without chocolate, and Hawk, her sister’s ex-husband. Sure, he’s a sexy former NHL star who can make her pulse pound with just a wink. But he belonged to Bridget first. And no matter how long she’s had a crush on him, how great he’s always been to her dad, or that her sister is engaged to someone else now and Ali needs a date to their engagement party, she can’t give in to temptation. Can she?

It’s been years since his disastrous marriage crashed and burned, and Bradley Hawk has finally moved on. So when Bridget blows back into town with her new fiancé, throwing the engagement party of the year, he could care less . . . until Ali tells one little lie that lands him smack dab in a fake relationship. After one promise to be Ali’s date and two of the hottest kisses he’s ever had, Hawk can’t deny how much he wants her. But what happens when this fauxmance starts to feel very, very real?

Review: This wild and crazy ride was every bit as delightful as the two characters the author created in this slap-happy tale about second chances.

Ali had loved Hawk with every part of her being since they were kids growing up in Destiny bay. What she hadn’t realized was how her sister’s appearance would steal him away. She convinced herself she could get through him marrying her sister. She could convince herself that their friendship would weather his divorce from said sister. Seriously, she had a much better relationship with him than her sister Bridget. Falling for him again, though, would be sheer lunacy.

That’s what we romance readers call a trope. In fact, it’s a trope I can’t resist. Maybe because I only had brothers, but I hold a soft spot for sisters. This pair, however…

All Hawk knew was that he really was tired of standing between Ali and her family. Sure, he got it. Marrying and then getting dumped by her sister was a huge hurdle to get over for both of them. He, because of his broken heart; and Ali because of her insecurity about not being enough. What would this fauxmance do to their relationship? And why was the thought of being with Ali for real so tempting?

A fake relationship brought all kinds of luscious and sinful thoughts into Ali’s head–and definitely into Hawk’s hands. The possibility of a real romantic relationship between them seemed possible, but could Ali ever trust enough that he really wanted her for her and not as the consolation prize?

I really loved how the slow heat simmered and burned between these characters. At times I really wanted to take a bite out of Bridget and Gail, their mom, but Martina Adair made sure to humanize both. Thanks for a beautiful and sweet romance with some extra sizzle on the grill. Thanks!