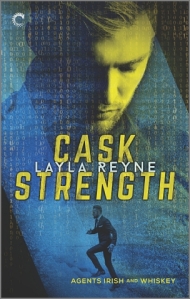 Blurb:  Professionally, the FBI team of Aidan “Irish” Talley and Jameson “Whiskey” Walker is as good as it gets, closing cases faster than any team at the Bureau. Personally, it’s a different story. Aidan’s feelings for Jamie scare the hell out of him: he won’t risk losing another love no matter how heart-tripping the intimacy between them. And loss is a grim reality with the terrorist Renaud still on their trail, leaving a pile of bodies in his wake.

Going undercover on a new case gets them out of town and off the killer’s radar. They’re assigned to investigate an identity theft ring involving a college basketball team in Jamie’s home state, where Jamie’s past makes him perfect for the role of coach. But returning to the court brings more than old memories.

As secrets and shocking betrayals abound, none may be more dangerous than the one Jamie’s been keeping: a secret about the death of Aidan’s husband that could blow his partner’s world apart and destroy forever the fragile bonds of trust and love building between them.

Review:  Agents Talley and Walker are on a professional high. Their off the clock personal time is good, but it’s not quite what Jamie wants. Jamie is head over heals in love with Aidan, and Aidan is doing all he can to distance himself from Jamie and his own emotions. When the two officers that investigated the crash that killed Aidan’s husband are shot neither man handles himself well. The investigation into Renaud has become too dangerous and both men need to disappear for a time. There is a case in North Carolina that will get them out of the way and can use their particular strengths and talents. Jamie finds himself back on the court as a coach. Surprisingly, his ex-boyfriend shows up. Seeing Jamie doing something he loves, in a place he loves, with someone he deeply loved helps Aidan realize what he has to lose.

I am captivated by this story. I have no clue why, but I have a need to know what’s happening next. Yes, a need. What was Gabe doing, what did he know? Everyone surrounding Aidan seems to be involved in some level of terrorist activity. Or rather, everyone who did surround him. Renaud is killing everyone involved in his orchestrations. Who else is Aidan going to lose to Renaud?

In addition to the Renaud situation Jamie and Aidan have to get over themselves and their own hang ups. Jamie does a lot of bending over backwards for Aidan, as soon as he stops Aidan ends things. I’m not sure how I feel about that. It’s their issue to work out, I suppose. It’s not something that would make me stop reading or anything. I don’t even feel the relationship is all that imbalanced, but Aidan is definitely a bit of a d-bag. And of course Jaime has his big secret he’s been keeping for months. This is another thing I’m unsure about. I don’t know if I’d be all that upset Jaime has spent months trying to exonerate Gabe. As a plot device this feels a little drummed up to me.

So, the writing. This book is pretty much all telling. That’s not awful, but it’s not my thing. I’m also not really in love with some of the prose. I don’t want to say it’s cheesy or sappy, but I can see a general drift in some instances toward something I’d call sappy. Overall, I’d have to say I love the mystery/suspense arc, and I love reading the trials and tribulations of Jaime and Aidan’s relationship, but I’m not particularly impressed with the craft. Thankfully, I feel story is more important than craft.