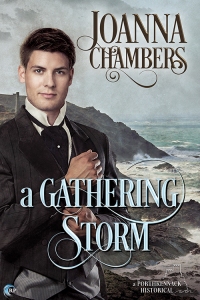 Blurb: When grief-stricken scientist Sir Edward Fitzwilliam provokes public scorn by defending a sham spiritualist, he’s forced to retreat to Porthkennack to lick his wounds. Ward’s reputation is in tatters, but he’s determined to continue the work he began after the death of his beloved brother.

In Porthkennack, Ward meets Nicholas Hearn, land steward to the Roscarrock family. Ward becomes convinced that Nick, whose Romany mother was reportedly clairvoyant, is the perfect man to assist with his work. But Nick—who has reason to distrust the whims of wealthy men—is loath to agree. Until Fate steps in to lend a hand.

Despite Nick’s misgivings, he discovers that Ward is not the high-handed aristocrat he first thought. And when passion ignites between them, Nick learns there’s much more to love than the rushed, clandestine encounters he’s used to. Nevertheless, Nick’s sure that wealthy, educated Ward will never see him as an equal.

A storm is gathering, but with Nick’s self-doubts and Ward’s growing obsession, the fragile bond between the two men may not be strong enough to withstand it.

Review:  This book absolutely transported me to another time and place. The writing, the kindling of the romance, the setting – all were gorgeous. Joanna Chambers possesses a keen ability to craft remarkable tales with standout characters, and this historical set in 1853 is one that instantly became a favorite of mine.

Nick had lived in the Cornwall village of Porthkennack all his life. Due to his bastard lineage, he has been named the land steward of his grandfather Godfrey’s estate. But his life is far from carefree, as Godfrey does not openly acknowledge their blood tie. Nick is the son of a Romany woman, and furthermore, there is talk that he sees spirits. This all adds up to disfavor and distrust toward Nick from many of the locals. Nick despises the spirit talk, and any talk of seers or conjuring the dead. He is rather a dark and brooding loner, and has these many reasons – among others – not to trust easily. Nick often considers leaving Porthkennack to find and learn more about his mother’s people.

Ward – Sir Edward Fitzwilliam – has purchased a section of land adjacent to Godfrey’s and built a rather modern type home near the cliffs there from which to conduct scientific experiments. Ward engenders wariness from the locals with his seemingly eccentric ways. His raspy voice (thanks to childhood diphtheria), talk of ghosts and attempts to utilize lightning to contact said ghosts, all have tongues wagging. Yet, Ward is an aristocrat, so his eccentricities are tolerated for the most part. Ward has the confidence that wealth assures, and the drive to prove his theories in a scientific manner – the main one being that he can speak to his brother, George, through the veil of death. It’s a goal he is consumed with.

Nick and Ward build a relationship on the foundation of a misunderstanding. Ward is aware of this but Nick is not – in fact, he believes he’s being blackmailed. After Nick initially becomes a reluctant participant in Ward’s scientific experiments, a slow build of mutual respect, friendship, and attraction develop. Watching this unfold via the author’s flowing words was sublime. Each man was stubborn and prideful. While each was attracted to the other, neither was sure that carnal advances would be welcome. By the time they figured out their mutual attraction, the chemistry and sexual tension had reached a boiling point.

The story is from the POV of both Ward and Nick, which to me was crucial. There was always a clear reason as to their actions and reactions. With both men having quite opposite backgrounds and beliefs, getting inside both of their heads served well to know how they were parsing things out. Being aware of their inner thoughts and closely held beliefs caused me to take both Nick and Ward into my heart at once, and I was eager to see how their head-butting would lead to romance.

There is a dichotomy in their sexual histories, which added fuel to the dynamic. Ward was much more experienced in sexual encounters, having the status to afford privacy, while Nick’s sole experiences consisted of furtive, anxious meetings. Each man had much to teach the other, both inside and outside of the bedchamber. Witnessing Nick kissing Ward for the first time, then introducing him to intimacy vs. practically anonymous sex was an emotional plateau, a true awakening of Ward’s soul. I absolutely appreciate when an author conveys such depth of character and relationship development in the sex scenes as the ones I read here.

After nearly ruining everything when his high-handedness and failure to decipher Nick’s trigger points drive a wedge between them, Ward’s focus was ultimately forced from his obsession with proving he could contact George, onto his relationship with Nick. Not before I wanted to reach into the pages of the book and shake him, mind you.

A big nod of approval goes to the author for including two strong female secondary characters. One is Nick’s cousin, the other is his mother. The latter woman we become acquainted with posthumously through Nick’s memories and talks with Ward. The positive impression she made on him and traits she continues to evoke in Nick are strikingly evident. The other strong character depicted here is Cornwall herself. A stunning, rich landscape and heritage stands rife in this region. The land seeps into every corner of Nick and Ward’s lives.

In this story thereis significant page time given to Ward’s scientific endeavors, and his attempts at séances and such, yet this is not a paranormal story. The meat of the story is how Ward and Nick each find the courage to look beyond what they had long believed their truths to be, in order to forge a new and lasting truth together. The climax of this story turned out to be something completely different than I was expecting – and I mean that in the most positive way. Boy do I love a twist on the way to a happy ending. I was more than satisfied with the plausible solution devised to allow Ward and Nick to live closely together in Victorian times. Not too proud to beg the author for a future coda. 😉