Welcome to the For a Good Time, Call Blog Tour! We’re delighted to have you stop by, so please, make yourself comfortable. Can we offer you a virtual beverage?

As part of this blog tour, Anne and E.J. are giving away a $50 Riptide Publishing Gift Certificate to one lucky winner! *confetti* To enter the giveaway, please comment on any official tour post with your name and contact info before midnight (EDT), April 15th. Good luck, and enjoy the tour!

One of the big things we cut when revising For a Good Time, Call was a whole crabbing montage, beginning with a scene where Seth goes in to see his father at the bank to borrow the boat. Up until this point it has seemed as if Seth’s father, Phillip, is totally on board with Uncle Kirk’s (Phillip’s brother’s) adamant refusal to let Grandma (their mother) sell Sentinel House. In this scene, though, Seth begins to wonder just how true that is.

Thank God the boat was one of the few things considered entirely his father’s property, so it wouldn’t be an obvious run around for him to go to Dad to borrow it. When Seth stopped by the bank, he only had to kick back in the marble lobby of the historic building for a few minutes. It had been a bank for a long time, but it had only recently been restored into this sort of opulence thanks to the influx of Hollywood money.

Matter of fact, that same revenue stream was what had made it possible for Seth’s father to upgrade to a new C-Dory. It was only 16 feet, but it had a hardtop cockpit, which was unusual in a boat that small. Unusual, but very, very useful in the Pacific Northwest, especially if one needed to brave the actual ocean.

“Mr. Larson will see you now, Mr., um, Mr. Larson,” Dad’s assistant announced to him. He didn’t know her, she’d been too far behind him in high school, but she looked like she might be related to half the town.

“Thanks.” Stuffing his hands in his pockets, he sauntered past the wall of windows that separated the bank president’s office from the lobby. It wasn’t a deliberate attempt to goad his dad, he’d just been feeling unusually happy and relaxed lately.

“Seth.” His father nodded and then indicated a chair on the other side of his huge desk. “What can I do for you?”

“I was hoping I could borrow the boat tomorrow, take my friend Nate out crabbing. I’ll need to trailer it, too.” Using the pickup to haul the trailer was a given.

“Nate, hmm?” Dad’s eyebrows dipped slightly. “The same Nate who did all this research on the knife?”

Dammit, why had he said his name? “Well.” Seth cleared his throat. “Yeah.” Excellent. He’d just screwed his plans for tomorrow and probably got himself into an argument.

But all Dad did was stand and go to a file cabinet to rifle through the top drawer. “Here.” He turned and tossed a small manila envelope Seth’s way, catching him by surprise. He nearly missed snagging it out of the air.

The packet was sealed, but there was something bulky inside, although not too heavy. “What’s this?” He was already opening it, which may have been why his father remained silent. Inside was a set of shiny new keys, attached to one of those floating key chains. “These are for the boat?”

“They’re yours. I’ve been meaning to give them to you. It seems silly for you to come ask every time you want to borrow it.” Adjusting his tie so it didn’t flop onto his desk, his father sat back down, not meeting Seth’s stare.

“You’ve never given me boat keys before.”

“No.” His chair creaked as he leaned back in it. “It’s come to my attention that you’re an adult.”

His father drew in a deep breath and held it a second before letting it gust out. “That was one of the clues.” He smirked, but only half-heartedly. He looked as if he had more to say, but just then his assistant interrupted them.

“Mr. Larson?” She stood in the office doorway. “Your one o’clock is here.”

“Thank you, Elisa.” Then he turned to Seth. “We should get coffee soon. I have some things to discuss with you.”

The only thing he knew for certain right now was that this conversation had ended. He got up and held the key up in the air between them. “Um, thanks Dad.”

“You’re welcome.” His father nodded, his normal indifferent expression already in place. As Seth walked out, though, he seemed intent on clicking that ball point pen in his hand over and over. 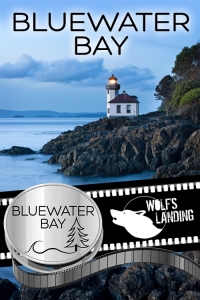 About For a Good Time, Call…

Thirty-seven-year-old Nate Albano’s second relationship ever ended three years ago, and since he’s grace—gray asexual—he doesn’t anticipate beating the odds to find a third. Still, he’s got his dog, his hobbies, and his job as a special effects technician on Wolf’s Landing, so he can’t complain—much.

Seth Larson, umpteenth generation Bluewater Bay, is the quintessential good-time guy, content with tending bar and being his grandmother’s handyman. The night they meet, Seth’s looking for some recreational sex to escape family drama. But for Nate, romantic attraction comes before sexual attraction, so while Seth thinks they’re hooking up, Nate just wants to talk . . . genealogy?

So they declare a “just friends” truce. Then Seth asks for Nate’s help investigating a sinister Larson family secret, and their feelings start edging way beyond platonic. But Nate may want more than Seth can give him, and Seth may not be able to leave his good-time image behind. Unless they can find a way to merge carefree with commitment, they could miss out on true love—the best time of all.

About Bluewater Bay
Welcome to Bluewater Bay! This quiet little logging town on Washington state’s Olympic Peninsula has been stagnating for decades, on the verge of ghost town status. Until a television crew moves in to film Wolf’s Landing, a soon-to-be cult hit based on the wildly successful shifter novels penned by local author Hunter Easton.

Wolf’s Landing’s success spawns everything from merchandise to movie talks, and Bluewater Bay explodes into a mecca for fans and tourists alike. The locals still aren’t quite sure what to make of all this—the town is rejuvenated, but at what cost? And the Hollywood-based production crew is out of their element in this small, mossy seaside locale. Needless to say, sparks fly.

Catalyzed by her discovery of LGBTQ romance, Anne Tenino left the lucrative fields of art history, non-profit fundraising, and domestic engineering to follow her dream of become a starving romance author. For good or ill, her snarky, silly, quasi-British sense of humor came along for the ride.

Anne applies her particular blend of romance, comedy and gay protagonists to contemporary, scifi and paranormal tales. Her works have won awards, she’s been featured in RT Book Reviews, and has achieved bestseller status on Amazon’s gay romance list.

Born and raised in Oregon, Anne lives in Portland with her husband and two kids, who have all taken a sacred oath to never read her books. She can usually be found at her computer, procrastinating.

E.J. Russell holds a BA and an MFA in theater, so naturally she’s spent the last three decades as a financial manager, database designer, and business-intelligence consultant. After her twin sons left for college and she no longer spent half her waking hours ferrying them to dance class, she returned to her childhood love of writing fiction. Now she wonders why she ever thought an empty nest meant leisure.

E.J. lives in rural Oregon with her curmudgeonly husband, the only man on the planet who cares less about sports than she does. She enjoys visits from her wonderful adult children, and indulges in good books, red wine, and the occasional hyperbole.

To celebrate the release of For a Good Time, Call…, one lucky winner will receive a $50 Riptide credit! Leave a comment with your contact info to enter the contest. Entries close at midnight, Eastern time, on April 15, 2017. Contest is NOT restricted to U.S. entries. Thanks for following the tour, and don’t forget to leave your contact info!

6 thoughts on “Guest Post and Giveaway: For A Good Time, Call… by Anne Tenino & EJ Russell”