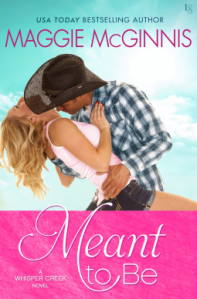 Blurb: At twenty-eight, Shelby Quinn’s already a has-been. Scooped off a country stage at sixteen and remolded into glittery pop princess Tara Gibson, she toured the country for a decade, playing to sold-out stadiums while slowly losing her soul. Now her sales are waning, and when her beloved father dies in a fiery plane crash, she finally comes apart at the seams. Alone and brokenhearted, she hides away at Whisper Creek Ranch, never expecting to meet a man who understands her in a way no one else ever has.

Cooper Davis was one of Boston’s top detectives—until a bogus investigation cost him his badge, his family, and almost his life. Now he’s wrangling horses and guests at Whisper Creek Ranch, while keeping one eye firmly on a super-secret VIP holed up in a private cabin—a beautiful, soulful singer who knows what it’s like to lose everything. Cooper and Shelby both have ample reason to guard their hearts. But if they can learn to trust each other, something magical awaits them under the big skies and bright stars.

Review: This bright and shiny love story is contagiously optimistic with a great cast of characters and a wonderful happily ever after. There are a few dark storm clouds to get through first, though. Maggie and her group at Whisper Creek are sure to help.

Shelby has had a lot of triumphs and a lot of crashes in her life, but she sure didn’t remember any of them being this bad. Nothing had ever felt as horrible as losing her father. Now she was truly an orphan, and worse, she blamed herself for his death. He wouldn’t have been in the airplane struggling through disastrous weather if she hadn’t asked him to. Why had she bothered him with her problems?

She’s determined to use this enforced time away in Montana as a true break from all things Tara Gibson. She’s going to hide out, relax, and take time to discover her next step. She’s got to get control of her life.

Cooper was working at Whisper Creek as a cowboy, seeking refuge and anonymity from the ongoing turmoil in his life exploding in Boston. His police officer past places him right in the crosshairs of his boss’s wife, though, when a celebrity needs to use their ranch as a hiding spot. Since she’s not bringing any bodyguards or protection with her, she’s going to need someone to keep her safe. Cooper’s the right guy in the right place, but he’s not feeling so lucky. When he sees who he’s guarding, though, his feelings do a quick 180.

These two both have a lot of baggage and uncovering that while falling in love? Well worth the possible pain. It might take a while and head in unexpected places, but that’s what I love about romance. Thanks for the great, heartfelt read, Maggie!