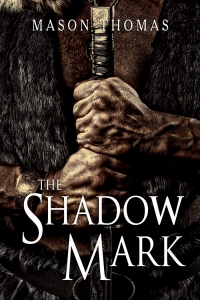 Blurb: Auraq Greystone, once a military officer with a promising future, exists on the fringe of society. Accused of murder, Auraq is on the run from the ax—until two fugitives crash into his solitary life. One is a young man named Kane. The glowing marks on his arm pulse with an otherworldly power, and they have made him the target of a sinister organization called the Order of the Jackal. When the old man protecting Kane dies in an ambush, Auraq swears an oath to take his place.

But the runes are far more significant than they realize. They are a message from the shadow realm, a dark memory of the past—one holding evidence of a bloody massacre and its savage architect; one that will shake the kingdom to its foundation. Risking arrest and execution, Auraq fights to get Kane to the capital city where the cryptic marking can be unlocked.  And with assassins close on their trail, Auraq might never get the chance to show Kane what’s in his heart—or the way their journey together has changed him.

The Shadow Mark is an epic tale of magic, murder, conspiracy, betrayal, and—for the two men tasked with unraveling the mystery—love and redemption.

Review:  I absolutely loved this book! It’s a full length action packed novel that I did not want to put down. This is book 2 in a series but I don’t think you need to read the first one to read this one. They each had a very different tone to them. Lord Mouse is the first book. It had a lot of humor and a stronger emphasis on the love story. Shadow Mark is a fantasy with a side of romance. There’s some amusing moments but the majority of the book is about the guys trying to stay alive. I adored both books but don’t expect a repeat of book one. Shadow Mark is about a new couple facing new dangers. It gets pretty intense. There’s curses, magic, power struggles and tons of awesome sword fighting. I loved every minute of this book.

Auraq is on the move hiding from his own demons one night when a pair of travelers come upon him. They’re attacked forcing Auraq to make a promise to protect the younger man named Kane. Kane has a curse of some kind making itself known on his skin. They make a plan to travel to a bigger city to ask mages what it is and can be done to remove the burden from Kane. Problem is there are highly trained assassins and creatures hunting their every step. Auraq has to protect Kane long enough to make it to the city where they think they’ll finally have answers. The answers just bring more questions. Through their time spent together Kane becomes more than just a duty to Auraq.

Auraq is amazing! Seriously I have no idea how was standing for most of the book. He was a well trained soldier back in the day. He’s running from his past and struggling with his guilt. Auraq is a wanted man. Showing his face puts himself at risk. He is brilliant and calculating. A master swordsman and a hero to Kane. Kane is an apprentice thrust into danger by an unknown source. He has no knowledge of what to do or any skills to protect himself. The men are total strangers when the voyage begins. Their journey is hard fought and emotional. This book had me on edge the entire time. The intrigue is fantastic. The battles are fierce. I loved the characters. The baddies are eeeevil. This book was fantastic! It’s the type of book you want to pick up a sword and join the battle. Anyone who loves fantasy and m/m should pick this one up. Loved it!