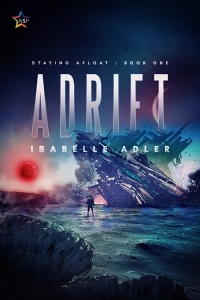 Blurb:  Some jobs are just too good to be true.

Captain Matt Spears learns this the hard way after a mysterious employer hires his ship to hunt down an ancient alien artifact but insists on providing his own pilot. Ryce Faine is handsome and smart, but Matt has rarely met anyone more obnoxious. With tensions running high, it isn’t until they are attacked by the hostile Alraki that Matt grudgingly begins to respect Ryce’s superior skills, respect that transforms into a tentative attraction.

Little did he know that their biggest challenge would be reaching their destination, an abandoned alien base located on a distant moon amid a dense asteroid field. But when Matt learns that Ryce isn’t completely who he says he is and the artifact is more than he bargained for, he is faced with a difficult choice. One that might change the balance of forces in the known galaxy.

Matt doesn’t take well to moral dilemmas; he prefers the easy way out. But that might not be possible anymore, when his past comes back to haunt him at the worst possible moment. When faced with a notorious pirate carrying a personal grudge, the fragile connection Matt has formed with Ryce might be the only thing that he can count on to save them both.

Review:  I like reading Sci Fi. I sometimes have to be in the mood for it though. So I don’t know if I just read this one at the wrong time or what but it was just okay for me. It starts off kind of interesting. Matt is hired for a super secret job. He’s a smuggler but they’re not hiring him for his skill. They just want his ship and secrecy. He can’t say no to the amount of money on offer. The other stipulation is that another pilot will be flying his ship to an unknown destination. Matt doesn’t like the idea. After getting over his initial bristling about someone taking over his ship, he admits he is attracted to the pilot, Ryce. Ryce isn’t interested in Matt’s advances on him. His people aren’t usually interested in sex for fun. Ryce has a job to do and that’s his focus. Matt runs into a little trouble along the way further complicating the mission. Getting out of it forces the guys to work together. Gaining trust and helping the guys get to know each other better.

Personally I just couldn’t ever get into this story. I did like the smuggler and pirate aspect. I wondered what Ryce was searching for right up until the moment we found out. The pacing is kind of slow however. I got bogged down in details at times. The most exciting moments come from Matt’s past catching up with him. You get little pieces of things but don’t know the full story. Matt is the liveliest part of this book by far. It’s not a long book but it took me a few days to read because it wasn’t keeping my interest. Ryce was on his moral high horse for most of the book. He’s kind of cold and unapproachable. It’s explained in his past he’s been treated as an exotic conquest for people so he’s uncomfortable with Matt trying to hit on him. For me the most intriguing character had the smallest page time. Val the big brute ex-con mechanical genius who reads literature and gives Matt crap.

This is NOT a romance. If you’re looking for that I’d just move along. I’m fine with a side of romance in my books but the build of the romance in Adrift didn’t really resonate with me. So ultimately I wasn’t at all invested in the romantic storyline. It felt like an after thought. Not enough tension or build. No moments where I see the possible sizzle between them. The most I saw was respect and a one sided attraction. I felt they formed a friendship but not a romantic attachment. I guess it could be the beginning of one but considering I didn’t like this one all that much I’ll probably never find out. That sounds harsh but this one just wasn’t for me.