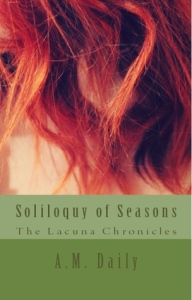 Blurb:  The cycle of seasons on Ceres, a temperate and bountiful spring and summer season followed by a horrifying and extended freeze, rules the minds and lives of all inhabitants of Earth’s third sister planet completely. Cereans are an industrious people bound strictly by tradition and by their original colonization directive– be fruitful and provide the much-needed sustenance for the sister planets.
In Whitewater Valley, Attis is something of an outcast. Born a spring child with the mark of fire, a telling sign of misfortune, Attis knows firsthand the horrors of the freeze and the deadly consequences of the sleeping sickness. However, it is not the dangers of the freeze that haunt Attis, but the lingering childhood memories of a mysterious onyx-eyed boy in the marketplace.
When memories once again become reality, and Attis finds himself behaving in ways that break every Cerean tradition, he must discover for himself his place on Ceres and in the universe.

Review:  I have completely loved this series. One of my favorite hidden gems it seems the majority of readers haven’t found yet. The first three books follow the three main characters throughout their journeys. This book takes a bit of a side trip to a planet called Ceres. The one Xiah takes refuge on in Whispering Gods. It’s the story of Attis. The flaming haired man who’s heart Xiah had obviously broken. This book is a somber read. There’s really very little hope offered at all up until the ending.

Attis is from the planet of Ceres. Most planets aren’t able to sustain the lush plants and life Ceres is able to in the warmer months. Ceres like so many other planets in the Lacuna books were colonized by humans after Earth is ravaged by nuclear wars. Ceres isn’t a utopia however. It has months and months of bitterly freezing weather that ravage all things living. The people of this planet are hard working and take pride in their planet. They’re resolved to the devastation the freeze inflicts upon them regularly. People, animals and crops die every freeze. It’s a fact of life to the people of Ceres. They work hard and enjoy their time in the warmer months and bunker down and hope to survive the cold ones. The book follows Attis from his wild spirit as a kid to adulthood. It’s filled with a lot of heartbreak. He has his adopted family, the farm and for a few years he gets visits from Xiah.

Xiah intrigues Attis. Xiah’s spirit longs to be free and explore. Attis is tied to his farm forever. It’s an obligation that Attis has no desire to be rid of. Xiah turns on his charm and the two become friends. Xiah knows there’s a mutual attraction between them so of course he pushes their relationship to become a sexual one. For Xias it’s all fun and doing what feels good. He thinks he’s bringing a little fun and pleasure to Attis. Attis sees it a bit differently however. He falls for Xiah. Xiah comes and goes over the years leaving Attis to pine away and become a little more bitter each time Xiah goes.

Even writing this is a bit depressing. What this book does offer is a glimpse into the pain and heartache Xiah causes his lovers he has sprinkled around the galaxy. Attis sees Xiah as his one thing to look forward to but Xiah was never going to settle down with Attis. Attis learns this and wars with himself over his pride and his need to feel pleasure and happiness for the moments he has access to them. They are two very different men with very different outlooks on their lives. Xiah does feel bad for what he’s done after it’s too late. He’s impulsive and lives in the moment. Xiah is selfish and clueless about feelings. Attis is strong. He’s a survivor. He’s loyal. While I didn’t connect strongly with his character there’s no denying feeling his sadness. How every year life breaks his spirit just a little bit more. There was an HEA thank goodness. I wasn’t sure I was going to get one considering the tone of the book and where we left him in the last book.