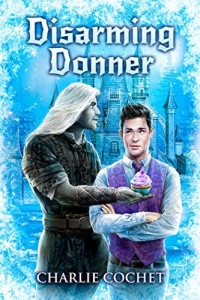 As a beloved Rein Dear and Christmas elf for Mayor Kringle, Donner prides himself on his flawless reputation, good sense, and wise decisions. Donner never does anything until he’s thought it through properly. He’s certainly not one to get flustered, infuriated, or fall prey to romantic nonsense. At least not until the most unlikely of elves begins chipping away at Donner’s defenses.

Calder is a Dockalfar—a dark elf. He’s wicked, untrustworthy, and armed with lethal magic. At least that’s what everyone thinks. It’s easy for them to believe the worst and mistrust him before they’ve even spoken to him, but Calder is out to prove that he’s more than his Dockalfar blood, especially to a certain Rein Dear who has caught his eye. But it will take more than sweet words for Donner to admit what’s in his heart.

Review: I have been a slacker and let my review of this sweet little story of Charlie Cochet’s slip past; but never fear dear ones, it’s just as delicious a couple of days after the holiday itself. Read with me this little tale that reminds us that even if someone looks different and all you’ve every heard is that their kind is evil, you need to give them a chance. It might make a huge difference in both of your lives.

Donner is one of the rein dears that lives in the Christmas village. One of his friends, Cupid, had recently come out with the news that he was part Dockalfar. Dockalfars were known for using dark magic and causing chaos and destruction. Luckily, Cupid had taken after his mother, a winter faery, and was extremely sweet and kind.

However, Cupid’s two brothers, Calder and Gunne, were full Dockalfar. Gunne had done something horrendous and had been imprisoned by their father. Calder was at the North Pole instructing Cupid on how to use his magic. Calder was different from his father and Gunne–he was sweet and kind. Plus, he had an eye on Donner. And against all his own wishes, Donner was attracted to Calder right back.

Ms. Cochet has created an over the top world of gumdrops and toy soldiers barking against the darker forces of mankind. I loved Donner’s dismay at his unwilling attraction to the dark Dockalfar, Calder. Calder was the hero for me, battling against stereotype and also the bad legacy left by his brother’s horrible behaviour. Loved this story! Thanks!