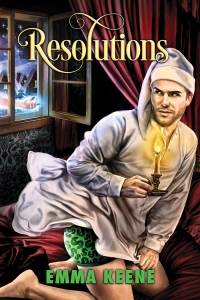 Blurb:  As an advertising executive, it’s Logan’s job to sell people holiday cheer, and he’s good at what he does. But deep down, Logan hates everything about Christmas, so he worries that his crush on the hot baker who loves the holidays is a recipe for disaster.

Last year, Logan saw Ryan at a holiday party Ryan was catering, and the attraction was instant. In a drunken moment, Logan made it his New Year’s resolution to ask the pastry chef out. But another year has slipped away, time is running out, and Logan’s assistant demands he collect on his resolution. Can Logan find the confidence that usually comes so easily to him? And if he does, will Ryan have any interest in spending the holidays with a man who doesn’t share his enthusiasm for the season?

A story from the Dreamspinner Press 2016 Advent Calendar “Bah Humbug.”

Review: This was a cute story about a guy named Logan who makes a New Years resolution to ask out the hunky baker catering his office party, Ryan. Logan visits Ryan’s bakery daily over the next year as a customer. Problem is Logan can’t seem to muster up the nerve to ask Ryan out on a date. Ryan hints he’s interested but Logan doesn’t see it. Ryan is well known for his baking and his gingerbread houses. One night a disaster ruins his latest creation he’s meant to enter into a contest the next morning. Logan helps him out making another one and they spend some time together. Then self doubt creeps back in and Logan once again backs off. His persistent sassy assistant keeps pushing for him to finally fulfill his resolution before the New Year.

This was a cute story. Very sweet and full of holiday charm. It does rely quite a bit on Logan being clueless about Ryan being interested in him too. Given it’s short length I wasn’t too frustrated when Logan retreats from Ryan over and over. I did like the characters. Ryan is adorable. It was certainly a festive and sweet story worth a read this holiday season.