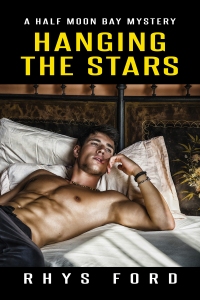 Blurb: Angel Daniels grew up hard, one step ahead of the law and always looking over his shoulder. A grifter’s son, he’d learned every con and trick in the book but ached for a normal life. Once out on his own, Angel returns to Half Moon Bay where he once found… and then lost… love.

Now, Angel’s life is a frantic mess of schedules and chaos. Between running his bakery and raising his troubled eleven-year-old half brother, Roman, Angel has a hectic but happy life. Then West Harris returns to Half Moon Bay and threatens to break Angel all over again by taking away the only home he and Rome ever had.

Review: Rhys Ford has a deliciously lyrical quality to her writing that always impresses me. Prose can be just as beautiful and flowing as poetry, and her books are proof. I totally enjoy the story as well as the phrases that sing to me. Am I the only one?

Half Moon Bay is collecting new citizens. Angel Daniels is back along with his brother Roman, plus bookseller  Lang’s brother West has ended up in town. Who knew that long ago, during a long-forgotten summer, Angel and West had fallen in love? Hidden, never consummated love. Well, everyone is getting ready to find out.

Now, however, it seems that West is trying to destroy Angel’s new home–the bakery he’s created. Why does it feel really personal? Maybe because someone’s trying to hurt Angel. And he can’t have anything like that going on in his life right now. If it’s dangerous being around him, CPS will yank his guardianship of his brother Roman away. So Angel’s got to find out what’s going on and stop it STAT. Roman has already been abandoned by their father–he doesn’t need his brother disappearing too.

Angel’s been held up, burned out, and doesn’t know who to trust. And why should he believe West when he says he’s not behind the violence? West dumped him brutally in a phone call ten years ago. Why would he believe anything that ba$tard says?

West has come a long way from the frightened boy just discovering his feelings, falling crazy in love with a teenaged Angel. He’s still drawn to Angel and has no idea about who or what’s been trying to drive him out of his bakery. Is it someone in his employ?

The mystery holds second place to the wonderful characterizations of the two new main characters. I love the interplay between Roman and West and Angel–creating a family out of these disparate but willing characters looking for family and acceptance. The romance threads are woven skillfully into the suspense plots and the ending brings surprises for all. Read it if you like mysteries with vested characters looking for a way to get whole. Thanks, Rhys!