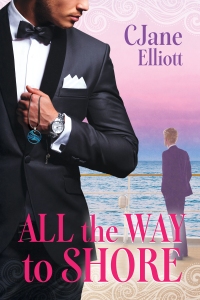 Blurb:  Jonathan Vallen has never felt good enough. A gentle musician who loves to garden, he’s woefully unsuited to running Vallen Industries, the family business. When his father hires a hotshot executive, Marco Pellegrini, to save the company, Jonathan moves away and leaves his humiliation behind. A year later and forty pounds lighter, Jonathan runs into Marco on an LGBT cruise. Marco doesn’t recognize him, the sparks fly, and Jonathan pretends to be someone else for the week—Jonah Rutledge—someone good enough to be loved.

Marco Pellegrini has always been driven. He rose from poverty to the pinnacle of business success, and he’ll do anything to protect his reputation—including hiding his bisexuality. Having saved Vallen Industries, he’s weary of the rat race and ready for a more meaningful life. When Marco meets his soul mate for that new life—Jonah Rutledge—on an LGBT cruise, he prepares to stop hiding and start living.

Back on land, the romance crashes when Marco discovers his perfect man is not only a lie but the son of his boss, Frederick Vallen. Jonathan resolves to win Marco back, but Frederick takes vengeful action. Jonathan and Marco must battle their own fears as well as Frederick’s challenge to get to the future that awaits them on the horizon.

Review: Jonathan is a disappointment to his dad. After his older brother’s death Jonathan’s dad expects him to take up the role of the son he lost. Mainly to run his company and continue the family name. Jonathan is forced into the closet by his father’s disapproval. He also has no interest in running his father’s business. When his father hires the gorgeous Marco Jonathan puts in a little time but then decides to take his chance to free himself from his father and his expectations. He turns in his resignation and escapes to his late mother’s cottage in Cape Cod. The freedom is good for Jonathan. He loses weight and recreates his look. Which is how when he and Marco end up on a cruise ship, Marco has no idea who Jonathan is. Jonathan knows who Marco is however and keeping the lie gets harder and harder as the guys form a connection.

The guys fall for each other pretty fast. Jonathan struggles with keeping the secret and each day they spend together on the cruise makes it more difficult to come clean without risking losing Marco forever. Most of the story relies on the lie which Jonathan’s cousin pushes him to keep going for some reason. It’s explained so the guys could keep having fun but you can’t help but question the logic once it’s obvious it’s more than a cruise fling. In these stories the truth is always going to come out and cause a fight. And it does. Marco has wanted to fall in love with someone this way for a long time. Despite being normally cautious he gives into his desire to see where things go. There’s some courtship and pining that happens after the big blow up that gets a little sweet and angsty for my tastes. Jonathan’s dad gets a little OTT ugly but Jonathan saves the day by finally standing up to his father. It’s all very much a cliché romance story. Not that that’s a bad thing if you’re in the mood for that type of read. I did like the couple. Marco is very suave and confident. Jonathan is adorable and smitten. They had some good tension going. I liked this book for what it was but it did have its flaws.