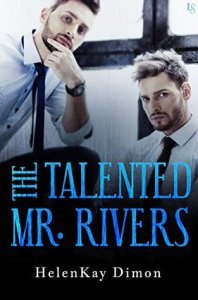 Blurb:  HelenKay Dimon’s suspenseful, provocative series of double agents and dark desire continues with a novel featuring two men bound by a dangerous job—and by the cravings they feel for each other.

As the son of an international crime lord, Will Rivers only inherited one thing after his father died: trouble. The Pentasus organization deals in kidnapping and murder, and Will wants no part of the power grab that’s tearing leadership apart. But the only way he’ll be able to escape is with some help from his former bodyguard, Hunter Cain, whose sculpted body and brooding looks keep Will awake at night. Somehow, Hunter has resisted the tension between them . . . until, suddenly, he gives in.

As a German intelligence officer working deep undercover, Hunter has a very good reason to keep Will in the dark about his identity and his intentions. Although the sex is hot, Hunter’s true feelings are a growing liability. Now the only way to save Will from his old life is to push him deeper into danger. But when two strong men are each determined to protect the other, the heat isn’t just combustible—it’s a firestorm.

Review:  Will Rivers and Hunter Cain cannot stop thinking of each other. They need to find each other after the fire that ruined Will’s family’s home. Unfortunately, Hunter isn’t the only person looking for Will. Technically, Will is the heir to a sizable fortune. A fortune made illegally. He’s also just trying to avoid getting killed by his own family. Will knows his sister is dead, but his brother is still out there. Will and Peter have a complex relationship. Once Will and Hunter find a safe place to hide, their sexual tension will wait no longer. Things immediately become much more complex than they should be. Will has to get over the fact Hunter originally was with him as a job. Hunter has to get over the fact Will is the heir to crime syndicate. They both have to stay alive.

I liked this book so much more than the first! Maybe part of that was a preference for these characters as opposed to the others, but I also feel the overall quality of this book was just much better. At the very least the plot made more sense to me. I’m glad I took this risk.

This story takes place over a relatively short period of time, and most of the relationship is straight up told. Whereas that’s not my preference, it does seem to work here. Hunter and Will both come across with a relatively desperate feel. When Hunter commented he couldn’t be without Will it felt much more stark than that kind of comment usually feels. I got the impression Hunter truly wouldn’t survive without Will.

I’ll happily read a Seth book if there ever is one. For anyone out there who wasn’t interested after the first book I think this one is worth the risk. It’s also possible to read as a standalone, but you’ll need to pay attention to exposition.