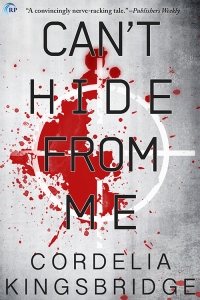 Blurb: Charles Hunter’s team is on a mission to extract an unidentified ATF agent from an undercover job gone wrong. All they’ve got to go on is the rendezvous location—until Charles recognizes the ex he hasn’t seen in years. Their “simple rescue mission” is about to get a lot more complicated.

For Ángel Medina, adjusting to life after his cartel nightmare is hard enough without confronting memories of a failed relationship. All he wants is a fresh start. But when a violent stalker lashes out from the shadows, Ángel realizes his nightmare is far from over.

As the stalker’s obsession escalates and bodies start dropping, Charles and Ángel are thrown together in a desperate search for the culprit. Tempers flare and old passions reignite, drawing them back into the same turbulent relationship that once ended in disaster.

But the stalker isn’t letting go—and the next strike might hit straight through the heart.

Review:  Charles Hunter has a boyfriend he can’t get over. Of course that’s the one his team just pulled from a long term undercover job with a drug cartel. It doesn’t help that Angel Medina isn’t really over Charles. Too much is happening in Angel’s life to want to get involved in any kind of relationship drama, but that doesn’t mean either guy is smart enough to avoid sex. Angel ends up working with Charles’ team. Creepy things begin to happen to Angel. Stalkery things. No one knows if it’s related to the case he just left, or something else. Charles and Angel still can’t stay away from each other. Angel’s stalker isn’t exactly appreciative about the resurgence of the relationship between Charles and Angel. Things begin to go wrong. By the time they figure out who the stalker is, Angel is already gone.

This book was set in San Diego, but written by someone who doesn’t live here. There were some stellar attempts to get details right, particularly the foot chase from the Motel 6 near the Chevy dealership there in La Mesa, but other things just fell flat. You’re not going to be able to get a Cuban sandwich delivered, here. Being San Diegan and reading this was kind of distracting. During an intense action scene I shouldn’t be wondering about the canal that goes under the 8 and Alvarado. Most people will not have this issue with the book.

For whatever reason, the mystery aspects of this book felt deeply obvious to me. I have no objection to reading formula based suspense stories, but I don’t want to see the formula clearly laid out in front of me. The aspects of the plot surrounding the phone were just particularly badly done, for me. Why would Angel have been thinking any of that phone related stuff if it were not to point us in that direction? When we got to the big reveal of the stalker it felt like old news and I resented Charles for not having figured out the obvious sooner.

Based on the blurb I should have loved this book. I didn’t, but I will freely admit some of my circumstances make this a more frustrating read for me than it will be for most other people. Despite feeling lukewarm about this book it is a competent and comprehensive mystery and suspense story with a viable reconciliation based romantic plotline.