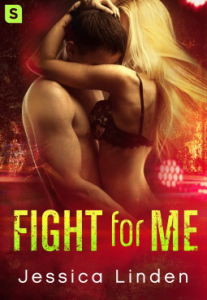 Blurb: Raised in the streets, Knox is a battle-worn MMA fighter with no past, present, or future. Fighting every day just to survive, Knox owns nothing but the pride in his victories and the scars on his hands. When his control snaps and he must flee the city to keep his life, he runs into a stunning woman with the same intent. All big eyes and delicate features, she’s not cut out to survive on her own. And when finding her own inner strength leads to a shocking act of violence, Knox knows he must protect her at all costs…

Natalie couldn’t spend another day under her father’s lock and key. Raised to be the perfect picture of wealth and sophistication, she detests the dark, ugly side of her father’s greed. Refusing to be held captive by her life a moment longer, she escapes his fortress – and runs right into the arms of the strongest, most dangerous, most desirable man she’s ever met. As instant attraction leads to explosive passion, Natalie finds she cannot leave his side. But as their pursuers loom closer and threaten to tear them apart, Natalie and Knox have to decide: is it easier to stand apart? Or is a love this strong worth the fight?

Review: Running away isn’t always the answer, but Natalie had to get out of her father’s control. After her mother died, she’d been isolated in the house, unable to go out or do anything without her father’s consent. And the way he was acting was plain vile, taking money from her trust whenever he wanted to since he was her “guardian” and felt he controlled her. Whatever happened to taking care of her because he loved her?

She really doubted he loved anyone but himself.

Knox has been fighting in the underground fight club for the last ten years. He’d initially loved it and living with X, his mentor. However, he’d come to see with clearer eyes that X was not a father figure at all. In fact, he was evil and only considered Knox a pawn in his empire. After finally getting at the end of his rope, he attacked X after a fight. Running away only caused X’s men to chase after him, determined to bring him back into the fold. Finding a woman being harassed in a dark alley, he attacked her attackers.

But as we all know, no good deed goes unpunished.

Now Knox and Natalie are on the run from both her father’s goons and the enforcers from X. When their enemies join forces to try to capture them, how in the world are these two going to escape?

I really loved how the characters were portrayed and I was so happy they both escaped! I just wasn’t sure HOW they were going to ever get to a safe place where they could just be. I loved how Jessica Linden concocted such a great plot–didn’t see it coming–but it was genius! This was a great romantic suspense without a lot of angst or drama–a perfect, uncomplicated read. Thanks!