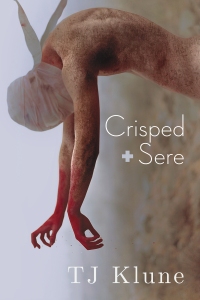 In a world ravaged by fire and descending into madness, Cavalo has been given an ultimatum by the dark man known as Patrick: return Lucas to him and the cannibalistic Dead Rabbits, or the town of Cottonwood and its inhabitants will be destroyed.

But Lucas has a secret embedded into his skin that promises to forever alter the shape of things to come—a secret that Cavalo must decide if it’s worth dying over, even as he wrestles with his own growing attraction to the muted psychopath.

A meaning that leads to a single word and a place of unimaginable power: Dworshak.

Review: Crisped + Sere is the second book in the Immemorial Year series and finishes the story arc begun in Withered + Sere.

Patrick, leader of the Dead Rabbits – a tribe of violent, radiation-effected psychopaths – has issued his ultimatum; return Lucas, and his tattoos, to Patrick or face savage annihilation. Cavalo, Lucas, SIRS, Bad Dog and the people of Cottonwood have twenty-one days before Patrick and his Dead Rabbits come to take Lucas forcibly and wreak havoc on everyone.

The countdown to Patrick’s threatened war was tension-filled and had the sense of urgency of a freight train barrelling toward to an almost certain doom. Every step, though, also had a sense of the fight for survival. The battle at Cottonwood was gripping and confronting and bloody and I was constantly alternating between feeling hopeless and hopeful. There were some scenes so emotionally intense that I needed a timeout from the heartbreak but needed to know what was going to happen next more and I found it really hard to put the book down. The author doesn’t shy away from detailing the violent nature of their battles. It is a brutal world they live in. It’s also inevitable that some of those we’ve come to care about will become victims to that reality.

Once again, the writing was outstanding. It paints the broad strokes of this bleak world, but then fills in the details with incredibly powerful scenes, the beauty found in moments amongst the bleakness, and the strength that sometimes comes from heartbreak. The complexities and the nuances at play in this story – from the choices made as a result of Patrick’s threats and the aftermath of those choices, to the characters themselves and their interactions – are cleverly done and build layers to the story. And the characters. Each and every one of them felt alive on the page (well, until they weren’t, in the case of some of them). Cavalo goes on a bit of a journey of self discovery in this book. He thought he had nothing of himself left to give to anyone else except his increasing madness. He thought the things he had done in his life made him unworthy and unreliable as someone others could look to, love and depend upon. He discovers that while he may feel that way, not everyone else does. He begins to see that there is more of him left than he thought possible. Maybe damaged and even broken, but still there. He realises he has a family in Bad Dog, SIRS and Lucas, as dysfunctional a family as they may be. Interestingly, as much as I felt drawn to Cavalo and Lucas, it’s Bad Dog and SIRS that I felt the closest bond of humanity with. Bad Dog, for all that he may be nothing more than a made up voice in Cavalo’s head, is so wonderfully believable (I’m still convinced that it’s really Bad Dog Cavalo hears, along with Lucas). The way Bad Dog’s voice is written is exactly how I have always imagined dogs would talk if they could talk human (stupid MasterBossLord and his stupid rules and stupid face). Fiercely loyal, brave, funny, insightful and so completely endearing, Bad Dog will always be one of my favourite characters. He makes me smile and I loved and adored him – spoiler alert: he makes it. I had to know that before anything else because if he hadn’t made it to the end I doubt my reading device would’ve either.

I’m glad to hear that the author intends to write two more books, because while this chapter in the lives of Cavalo, Lucas, Bad Dog, SIRS and the town of Cottonwood may be complete and some questions answered, there are still an awful lot of things I want know about the world created in Withered + Sere and Crisped + Sere, and the fascinating characters that comprise it. I want to see more of Cavalo and Lucas’s evolving relationship, as well as their own individual evolutions. I’m intrigued to know where they go from here and what they become.