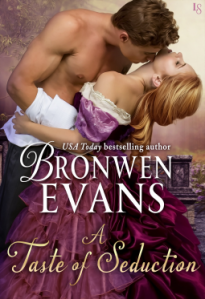 Blurb: The flames of desire fuel a torrid reunion as bestselling author Bronwen Evans returns with another captivating novel of the Disgraced Lords. See why Jen McLaughlin raves, “Bronwen’s historical romances always make the top of my reading list!”

Lady Evangeline Stuart chose to wed a tyrant with a title, or so society believes. That was five years ago—five long years that she could have spent with her first and only love: Lord Hadley Fullerton, the second son of the Duke of Claymore. Now Evangeline is a widow, and her soul cries out for Hadley. But when they see each other at last, everything has changed. The passion in his eyes has been corrupted by betrayal. Somehow Evangeline must regain Hadley’s trust—without revealing the secret that would spoil the seduction.

Hadley is determined not to be distracted by Evangeline. He and the other Libertine Scholars are in pursuit of an enemy who has been striking at them from the shadows, and Evangeline’s mere presence could be dangerous. But with one smile, one touch, one taste of Evangeline’s lips, Hadley’s resolve is overpowered by far more pleasant memories. As the two enter into a discreet affair, Hadley vows to give her his body, never his heart. That, she will have to earn.

Review: I do enjoy historical suspense, and Bronwen Evan’s Disgraced Lords series is one of the best. Years ago, a group of men with debauched sexual desires meet together to indulge their depraved tastes. A woman was dreadfully harmed, emotionally and physically, by this group. It’s too late for her to seek revenge against the men who’d harmed her because they’re all gone. However, she’s got a plan.

Why not hold the sins of the fathers against their sons and heirs, all of whom belong to the infamous Libertine Scholars? Using the pseudonym De Palma, she’s wreaking havoc on the men, damaging either them or the ones they love. In this book, it’s Hadley’s turn.

Hadley Fullerton had been the spare second son, so he wasn’t as desired on the marriage market as some of his friends. But that didn’t matter because he’d fallen in love with Evangeline only to be cruelly betrayed by her. Now he hears that she’s back in town, a widow, searching for him. Should he just ignore her? Or better yet, can he?

Evangeline’s got a secret that she needs to tell Hadley but she’s got to see him first. He’s been avoiding her. When she finally meets with him, he has the effrontery to be mad at her. Why didn’t he ever rescue her from the horrid marriage she’d been forced into? She’d certainly written to him enough times.

Yes, it’s one of those. Girl loves a penniless second son. Parents don’t like it. The planned elopement. The daughter rushed off into another marriage that was good for her parents but not for her. The letters that never get delivered. The man she loved completely unaware of what happened, thinking she’d betrayed him.

Mix this all up with the nefarious, scheming De Palma, who’s set her sights on Hadley.

If they get back together, it will only give their enemy more to destroy in her quest to ruin Hadley. Great plot line with delicious characters that will steal your heart! Thanks