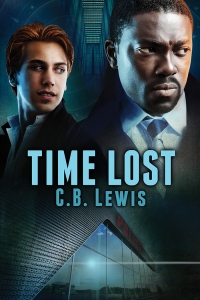 Blurb:  What began with a dead intruder and a missing scientist quickly becomes the most perplexing case of Detective Inspector Jacob Ofori’s career. Nothing about it makes sense, from the incredibly advanced technology found on the intruder to the scientist’s mysterious workplace, the Temporal Research Institute. Jacob’s gut tells him the TRI is hiding something, and the questions keep piling up: Who would abduct Sanders? What is the strange gate in his basement laboratory? How does it connect to similar gates in the TRI?

TRI engineer Kit Rafferty only wanted one night with the sexy older policeman, but Kit’s mouth tends to run away with him when he gets excited, and nothing gets him more excited than cutting-edge tech—like the intruder’s cybernetic eye. Suddenly Kit is pulled into the investigation—and into a relationship that could jeopardize both of their lives. Kit hates lying to Jacob, but he cannot reveal what really goes on at the TRI—time travel. Faced with time-jumping criminals but unable to share that knowledge with Jacob, Kit turns to a man who knows time travel firsthand: Janos Nagy.

Review:  DI Jacob Ofori has to solve a case that involves both a murder and a missing person. Right away he notices things are odd. There are likely actually two missing people, but one appears to be an assailant. When Jacob goes to the missing man’s business, TRI, to ask questions, he meets Kit Rafferty. As an employee of TRI Kit has signed forms stating he will keep confidential certain proprietary aspects of how TRI works. Basically, tell no one they have perfected time travel. Jacob’s son wants his father to date again, and seeing Kit would be a great way to get info about the case. After a night together Jacob and Kit have no plans to see each other again, and it was all mostly legal since Kit wasn’t part of the investigation. Of course the next day Kit becomes part of the investigation as he’s the best engineer TRI has and is most able to help investigate the crime and find Kit’s boss. Well, things get awkward, of course. Then Kit kind of sabotages some evidence. Still, Kit and Jacob are drawn to each other. The case becomes more serious as does Kit and Jacob’s relationship. One thing Kit didn’t count on was Jacob being as smart as he is. Jacob solves crimes for a living, regardless of how unreal the facts may appear

This book is part of a trilogy but not specifically a sequel. I have not read the first book, Time Waits, and I understood just fine what was going on and who was whom. I do believe I’d have found the story to be more nuanced had I read Time Waits.

I am not sure how I feel about the character of Kit Rafferty. He’s portrayed as awkward, a smooth operator, and unsure of himself. It’s the smooth operator part that felt off, to me. Is he confident or not? If the differences were explained by the situations he faced I missed it. For me this read like a characterization flaw. I did enjoy his interactions with other characters. Not that I’m on a team for a favorite character, but I did prefer Jacob Ofori in terms of characterization. I simply preferred the way he was written.

Time travel can be a tricky subject. This book was less about time travel itself and more about the crime made possible by time travel. There wasn’t a lot of theory on how it’s possible to travel in time, it was more about keeping the technology a secret. I found I enjoyed that. We still get to ponder all the ramifications of Jacob and Kit preventing the crime from being planned in the future which would ensure they never meet in the present.

I enjoyed this book and will happily read the next. I feel it struck a good balance between science fiction and mystery with a realistic romance thrown in.