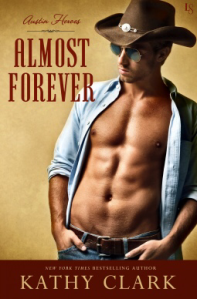 Blurb: A cold case leads to blazing-hot temptation in this novel of romantic suspense from bestselling author Kathy Clark. For readers of Nora Roberts and Karen Robards, Almost Forever pairs a rugged lawman with a woman who may just be a murderer.

Justin Archer is a Texas Ranger through and through, a loyal man devoted to the dangerous job he loves. But when the grisly discovery of a skeleton in a local vineyard turns an old missing-persons case into a vicious homicide, Justin finds that the toughest challenge of his professional career will be keeping his hands off his chief suspect: the dead man’s beautiful, young trophy wife. Did Lori Roberts kill for vast material gain? The only thing Justin knows for sure is that their chemistry is instantaneous—and overpowering.

Lori worked hard to build a new life for herself and her daughter. She turned her husband’s struggling vineyard into a thriving enterprise, and now she stands to lose it all over something that happened eight years ago. Justin could lock her up and throw away the key, but Lori desperately wants to trust him. More than that, she wants to let him into her wounded heart. Because Lori’s been running from the past for a long time . . . and she’s ready to start living for the future.

Review: I enjoyed this little romance from Kathy Clark, a follow up in her Austin Heroes series. The love angle moved quickly (!) and the suspense was taut, so overall it was a great read, especially for summer. And I always love when my beautiful state is the background for a book, and Kathy Clark did an excellent job showcasing its strengths.

Lori had both a child to protect and a vineyard to run, so when a body was found on the neighbouring property, at first it didn’t affect her. But when a Texas Ranger showed up at her door, it suddenly became very important. What was her husband’s body doing there? And he was dead? Mark Roberts had been missing for eight years, and she’d always assumed he’d run off with another woman. What does this mean for her and her daughter?

Justin didn’t believe Mark Roberts wife had had anything to do with his murder. Call it gut instinct or lack of evidence–he just knew. But was he willing to put his job on the line in order to prove her innocence? Being an officer of the law requires a certain level of detachment, but Justin’s finding it a hard line not to cross.

Suddenly, the stakes get higher–someone’s trying to kill Lori.

The Romantic plotline of this book is pretty easy to follow, but the suspense really surprised me! Great way and fun read that’s especially great for #Texans. Except for that t.u. ring, Kathy. Should’ve been an #Aggie one😉