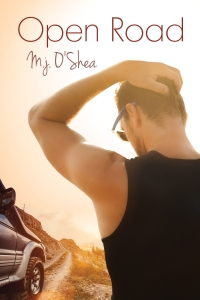 Blurb: Angus has been with the same guy for ten years. When his boyfriend breaks up with him the night of his thirtieth birthday party and announces his engagement to a twenty-two-year-old less than ten hours later, Angus is… a mess. To put it lightly. He spends days in bed, drinks himself into a stupor every night, and ends up losing his job and his apartment. His best and oldest friend, Reece, decides it’s time for an intervention. And a change of scenery.

Reece and Angus take off on a buddy trip across the US. They don’t have much of a plan; they just start driving. It takes Angus a couple of days to do much more than grunt when Reece talks to him, but slowly he opens up. They drive, talk, heal, shout, drink a bit too much sometimes, dance, meet new friends… and somewhere between Portland, Oregon, and Portland, Maine, they fall in love.

Which was the last thing in the world Angus expected.

Review:  Angus and Reece have been friends ever since their mothers moved in next door to each other when the boys were just six. After spending the last ten years building a life with his boyfriend, Angus is left adrift and unsure of himself when he’s dumped on his thirtieth birthday only to find his dirtbag ex is already engaged the very next day. When he doesn’t seem to be showing any signs of re-emerging from his haze of alcohol and hiding, Reece decides he’s had enough of seeing his best friend in pain from a break up that should have happened years ago, and persuades Angus to take a road trip with him from Portland, Oregon to San Francisco.

With Angus still needing time to heal away from reality, the best friends make for the Coachella music festival in Indio, which has been on Angus’s wish list to visit for years. After the promise of Angus finally coming out of his funk, the two continue their road trip across the country. Along the way, Angus realises his ex was never good for him and that his best friend, whom he had always thought was straight, has been in love with him the entire time. The new knowledge also makes Angus think that maybe their mothers’ belief that they belong together is right and the true love of his life has been in front of him all along.

Two things kept me wanting to read this book. I genuinely loved both MCs, and I loved the two of them together and seeing their relationship grow and change. I was a bit disappointed that the author decided to go with the cliche bad boyfriend. I get that it’s so the reader doesn’t feel any sadness at their break up, but it feels like it’s taking the easy way out. It also made me wonder what on Earth was wrong with the Angus that he would spend ten years of his life with someone who’s just not all that nice. We are not shown anything about Brad that would make me understand why Angus would love him. They seemed to be utterly incompatible in every way. There were several times where we’re told one thing, then told almost the opposite later (for example, Angus’s landlord kicks him out for missing rent, even though he and Brad had been living there for years and been reliable, yet the landlord apparently called Reece because she loved Angus and was worried about him) and some details which, if mentioned earlier, would have made more sense to the situation. I also found Angus’s recovery from what seemed to be clinical depression by a road trip, falling in love, and a good cry, fairly unlikely.

Even so, I ended up enjoying their road trip, and the page time given to it, and Angus’s healing was well paced. It would have been nice to have their romance given the same page time. The slow burn through three quarters of the book was great build up for their romance, but once they did get together, there were some sweet moments, and even some hot ones, but after all the build up beforehand it just felt like there wasn’t enough time given to it. An epilogue would have given it enough for the story to be more balanced between the road trip/Angus’s recovery and their romance. All in all, though, Angus and Reece, and their relationship, made for a sweet read. The road trip was fun, and the author’s portrayal of the locations of each of their stops really came to life for me, making them a fascinating and important part of the story.