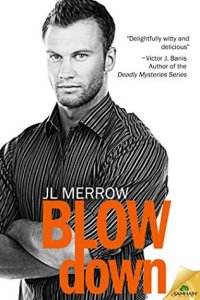 Blurb:  Death is what happens while you’re making other plans.

The last thing newly engaged plumber Tom Paretski needs is to stumble over another dead body. He’s got enough on his mind already as the reality of his impending marriage sinks in. Not only is his family situation complicated, his heroism at a pub fire made him a local celebrity. Now everyone and their uncle wants a piece of his psychic talents.

Hired to find a missing necklace, Tom and his fiancé, private investigator Phil Morrison, wind up trying to unmask a killer—and there’s no shortage of suspects, up to and including the local bishop himself.

As Tom and Phil try to uncover the truth, they find themselves pulled in all directions by the conflicting pressures of their families and their own desires. But the murderer they’re up against is a ruthless schemer who won’t hesitate to kill again. If Tom and Phil aren’t careful, their love—and all their plans for the future—could be blown down like a house of straw.

Review: The general public has become aware Tom Paretski is more than your average plumber. He’s a psychic plumber! Tom’s psychic talents are limited, though. He can’t really perform for a crowd, even though he gets coerced into volunteering to perform for a crowd. Tom can find water, hidden things, and dead bodies. As it happens, Tom does get to perform for the crowd. Someone hid a body. Surprise! Nothing ever happens in a vacuum, though. Tom is also coming to terms with the fact he said yes when his boyfriend Phil Morrison asked Tom to marry him. Weddings need to be planned! This stuff takes time! Tom’s real father should probably be involved. This is all more than Tom really wants to deal with. He’s just a plumber. When Phil begins to investigate the whereabouts of the dead lady’s missing necklace, Tom gets more attention than he really wanted because of his psychic talent. Not only is there a missing necklace, but a killer is on the loose. A killer who may not realize exactly how Tom’s psychic talents work or don’t work, but the killer is not going to leave Tom alive and risk being found out.

I love this series. I think I’ve probably run out of ways to express that while sounding remotely eloquent. At this point I just want to wallow in the tales of Tom and Phil. Or maybe wrap myself up in them like they’re a blanket. You know, perfectly sane stuff. The stories are so multi-layered. This is a good mystery full of a bunch of suspects who all vie for being the most reprehensible person you can be without actually being guilty of anything. Well, except one of them is actually guilty of murder. As this series is told from Tom’s POV, we get all our clues from him. Tom, perhaps, isn’t the best investigator. He’s a great plumber and psychic, but his investigating isn’t all that and a bag of chips. Tom just gets roped into the investigations and finds himself at the center of them while Phil and the local police solve the crimes.

Tom and Phil’s relationship has progressed throughout the series. Finally, in book 4, we learn why Phil and the Mysterious Mark divorced. We learn that, despite finding bodies at a young age and being able to chat up anyone, Tom is a remarkably innocent guy. Phil has had so many life experiences, both good and bad. In earlier books I presumed I knew the motivations for Phil’s actions, as did Tom. Now I’m not sure. Phil isn’t just a guy who grew up poor trying to escape the neighborhood he grew up in.

As I said, I love these books. Tom and Phil are maturing as a couple, Tom is simply maturing, and a lot of their ongoing issues are slowly being resolved. Each book gets them closer to being a happy, stable couple. We now know kids will probably be had at some point in their future. I love seeing their progression, and at the same time want to savor every book as we get toward their eventual HEA.