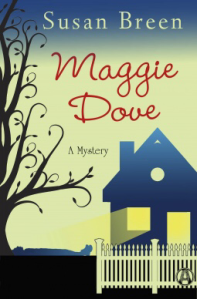 Blurb: Susan Breen introduces a charming new series heroine in this poignant and absorbing cozy mystery with a bite.

Maggie Dove thinks everyone in her small Westchester County community knows everyone else’s secrets. Then murder comes to town.

When Sunday School teacher Maggie Dove finds her hateful next-door neighbor Marcus Bender lying dead under her beloved oak tree—the one he demanded she cut down—she figures the man dropped dead of a mean heart. But Marcus was murdered, and the prime suspect is a young man Maggie loves like a son. Peter Nelson was the worst of Maggie’s Sunday School students; he was also her late daughter’s fiancé, and he’s been a devoted friend to Maggie in the years since her daughter’s death.

Maggie can’t lose Peter, too. So she sets out to find the real murderer. To do that, she must move past the grief that has immobilized her all these years. She must probe the hidden corners of her little village on the Hudson River. And, when another death strikes even closer to home, Maggie must find the courage to defend the people and the town she loves—even if it kills her.

Review: I found this little murder mystery to be both the cozy it was proclaimed to be channeled along with a bittersweet lesson that was sadly needed. Things move on in life, and if you keep your head facing back toward the past, it’s almost as if you’d died with your loved ones. Apparently Maggie wasn’t the only one who had to learn that bitter lesson

Maggie Dove certainly had a lot of loss in her life, losses that had paralyzed her. But she had to move forward–or lose someone else close to her. When her neighbor was found dead in her front yard under the tree they’d been fighting over–he wanted her to cut it down because it blocked his view of the river and she’d refused–she was at first worried about getting arrested herself. Everyone in town knew about their argument. But what worried her more was how her friend Peter had tried to almost cover it up. And he was a policeman!

As the days went on, she became more worried about Peter as gossip around town and even her own observations showed troubling information about him. It seemed as though everyone had a complaint about him. But she’d known him since he was a small child and, having been engaged to her deceased daughter, Peter was really the only family she had left. Setting out to find the killer might seem impossible for a Sunday school teacher turned detective, but Maggie had to do something to save Peter.

And then another death came from even closer. Was trying to find this killer going to be too dangerous, especially since it was highly likely they were wearing the face of a friend?