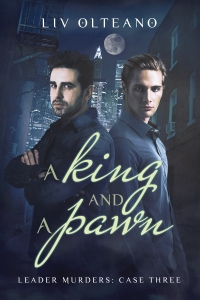 Bert Cooper’s life used to be great, until his sister turned out to be a traitor. Now Bert feels the whole pack looks on him with doubt and suspicion. To prove his loyalty, he volunteers to be the first ambassador at Fey Court, gathering information to finally solve the Leader Murders and punish those plotting against the Council and community. At least, that was the plan….

When Bert meets Sir William Matthew Sims, Court Interrogator, and one hell of a sexy man, life becomes a balancing act. And when the Fey King is assassinated, things become really messy.

Pack politics, fey politics, treason, suspicions of treason…. Bert has to choose between being ruled by his fears or standing up for what—and who—he believes in. And it might just break his heart.

Review: Bert Cooper feels tainted by his sister’s treason. He needs to prove he’s still a loyal beta. He also needs to be away from curious and possibly condemning eyes. His alpha, Herman Weiss, sends him to the Fey court as an “ambassador” where he’s pretty much just going to act as a spy. He’s even got a special ring so the Fey won’t be able to correctly read his emotional grid. It doesn’t take Bert long to realize he’s in way over his head. That attractive driver he got from the Fey court? He happens to be the Court Interrogator. He’s possibly one of the strongest Fey in the territory. Then Bert’s drunk and the Interrogator, Will, takes him home, and something really fishy is going on. Bert wasn’t simply drunk and the Fey king was killed. Poisoned. At the same party Bert had attended. Bert is now a suspect. Will is now in line to be the next Fey king. Bert and Will realize they each have the power to grant very important favors to each other. Will can testify on Bert’s behalf he wasn’t involved in the king’s death, he can also help Bert get evidence to help solve the Leader Murders case. Will has a request Bert really didn’t expect. Nothing about Will is as Bert expected, but Bert likes everything he sees about Will and Bert gets predictably scared by that. As Bert and Will begin to develop a relationship Bert has to decide on whether or not he can trust Will

Oh man, Poor Bert Cooper. Bert sees himself as Everyman. Even his name is unremarkable. He’s a little overweight, he’s got average looks, and his position as Beta is the pack version of middle management. No one loves Bert. No one sees Bert. When Bert’s sister betrays the pack his goal is to prove to everyone he’s the well regarded man they’ve been overlooking for years. Bert is comfortable there. Suddenly, Sir William Matthew Sims of the very powerful Sims line is looking at Bert. Bert doesn’t know how to deal with that. What could a beautiful being with so much in his life possibly see in Bert Cooper?

Throughout the book Bert is worried he’ll be viewed as a traitor to his pack and their way of life because of his sister’s actions. Will is effectively a traitor to the Fey court and wholly rejects the Fey way of life. Bert falls for a man who is everything he fears in himself all while thinking he’s not worthy of such a man. I loved it! Bert also fails to realize Will has just as much to lose as Bert if their relationship does fail. After Will leaves the Fey court he has nothing, but he’s willing to take the plunge on an unknown entity. The only thing Will knows for sure about Bert is he’s a guy willing to prove his allegiance to his pack in any way he can, and he’s willing to help a guy who is in the process of betraying his court and whole way of life.

So, the murders are finally solved, and this book is possibly the most overt example of all that any relationship you enter is a risk. An inherent part of starting a new relationship is trusting your partner to not hurt you or abuse you. Each narrator in this series has fallen for someone they deeply crave and fear. Every relationship has the potential to be either everlasting love or everlasting hell. This is the human condition.

2 thoughts on “A King and a Pawn (Leader Murders: Case Three)”