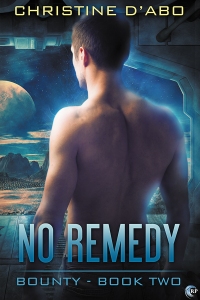 Blurb:  For months, Mace Simms has been seeking an antidote for the poison killing her mentor. Her only hope is Alec Roiten, a brilliant scientist hiding on a backwater planet. Posing as a research assistant, Mace offers the elusive genius all the help she can, ignoring the explosive chemistry between them. Soon they’re close to a cure.

But then Alec’s former love Byron shows up, attempting to claim a bounty on Alec’s head, and all that careful research gets left behind when they’re forced to flee. And when Byron realizes the tip-off about Alec was a ruse by his rivals to lure him out into the open to kill him, the bounty hunt turns into a three-person scramble for survival.

Byron wants his old lover back, Alec is consumed by a haunting secret about the poison he’s desperate to defeat, and Mace is caught between them. But she’s beginning to think that’s exactly where she belongs as the three are drawn together in their race against death.

Review: Mace Simms is running out of time. Her brother-in-law and close friend is not doing well. The poison will kill him if she can’t find the cure. Unfortunately, Alec Roiten is also running out of time. Alec’s former boss wants him back. So does Alec’s former boyfriend. Mace and Alec haven’t actually gone “there” yet, but they want to. So then Byron shows up and he’s a bounty hunter, but there is so much double crossing going on no one knows who’s the bad guy, they just need to get the hell out. They learn the hard way Alec has been tinkering with his genome. Then Mace learns why Alec has been tinkering with his own genome, and why he’s dedicated so much of his time to finding the cure for Ryana poison. Alec is in quite a pickle. Alec also doesn’t want to lose either Mace or Byron. Mace refuses to let herself look at the fact she wants to be with Alec and Byron, and Byron doesn’t see himself as worthy of much more than being a guard. Everyone has issues, and there will be death if they don’t work them out.

I enjoyed this book and appreciate it for its continuation of the plot from No Quarter, but didn’t particularly love it in its own. A big aspect of that is I just don’t enjoy menage stories. I always feel like someone is a bit of a third wheel or left out. For me, here, it was Mace. Alec and Byron both wanted her not only sexually but for the long haul in their relationship, but I couldn’t help feeling like she was being included in something Byron and Mace had created. It didn’t feel like something they had all created together.

I wanted to see more of what Alec had done to himself by tinkering with his genome. Seriously, that truth telling trick is awesome. I wanted Byron to develop better self esteem. Byron’s issues alone would have made for a fascinating story. Mace had her own issues and Byron told us about them. I’d have preferred to see that elaborated upon, as well. In short, a lot of aspects of this book felt rushed.

The continuation of the storyline started in No Quarter was good. I like that our friendly neighborhood pirate captain has had his story completed. I ended up feeling Mace, Alec, and Byron got a little short changed in their own book. If you liked No Quarter this is a must read, and even though I wasn’t impressed with all the aspects of the relationship featured in this book, I enjoyed reading it.