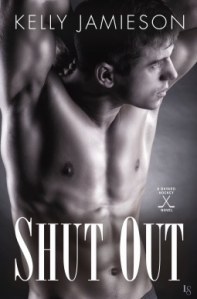 Blurb: From the bestselling author of the Heller Brothers Hockey series comes the first novel of a new hockey romance series featuring a college team whose players are heating things up both on and off the ice.

The Bayard College hockey team isn’t where Jacob Flass thought he’d be a season ago. He was a rising star in the Canadian major junior league, cruising toward a spot on an NHL roster—until a single disastrous night on the town brought it all crashing down. Now he’s out of options, except for playing well, studying hard, and staying away from girls. He’s not supposed to be flirting with the hottest, sweetest chick he’s ever met. But how could he possibly stay away?

Skylar Lynwood knows that Jacob is out of her league. She’s just trying to go with the flow, which isn’t easy when six feet and four inches of total hockey hunkiness is making a play for her one moment, then giving her the cold shoulder the next. Skylar’s head tells her that this rugged athlete isn’t worth her time, but her body says something altogether different. Risking her heart for Jacob may be the craziest thing she’s ever done . . . but she won’t let him shut her out.

Review: Kelly Jamison writes a hot and sweet NA romance that’s sure to delight readers, but this one’s different. It also highlights an important issue facing students and adults today: rape culture and teaching our youth how to know what consent is and when to step in to help a friend.

Early in the first part, we learn about Jacob’s past–and it’s not pretty. Playing hockey at Bayard is his last chance at the NHL draft, and he’s going to be a very good boy to get there. But expecting to spend the entire year sober and celibate? Not likely even for the best of guys. And while I admit he’s a little arrogant, Jacob truly is a good guy.

Skylar is really hoping to have a better year. Last spring one of her best friends had committed suicide while they were away at school together. Brendan’s death had really devastated Skylar and their third friend, Ella. And for some reason, there’s a wall between Skylar and Ella keeping them from being able to comfort each other. Plus, Skylar’s really struggling with all the math oriented courses she’s taking for pre-med. She has to work like a dog to get good grades–should it really be this hard? She’s worried if she doesn’t do as well as her older sister, her parents will be disappointed in her.

But should she really be in the pre-med program?

When Skylar and Jacob meet at a frat party, their combustible chemistry almost leads to a one night stand. But Jacob pulls back, remembering his pledge to be a good boy. Unfortunately, Skylar takes it the wrong way so when they meet again at the sexual harassment training Skylar is helping teach, it’s kinda touchy at first.

Soon, though, they meet again and suddenly Jacob comes up with the perfect solution to several problems: Skylar can be his pretend girlfriend. It will keep other girls from hitting on him, he’ll get to spend more time with Skylar, and it will explain to his roommates why he doesn’t go out.

When she agrees, he thinks he’s got a simple solution.

Hot, funny and sweet, the two characters show a lot of growth through the story arc and hit on issues that are very pertinent today. I’d advise parents and NA readers as well to read it. It’s very well done and explains both the rationalizations and the dangers surrounding our young generation today. Thanks!