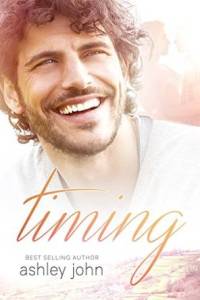 Blurb: When it comes to love, is timing everything?

Tom doesn’t have time for a relationship – not now that his fingers are practically touching the promotion he’s spent years chasing. His weekdays are consumed by desperately fighting for his editor’s attention and his weekends are wasted alone with meals for one and his cat for company.

All Cole has ever wanted is to work on the farm he was raised on, but money is tighter than ever and he is forced to get a job in a bar to keep a roof over him and his auntie’s heads. Time is running out for the farm but he spends his days dreaming about a future he thinks he’ll never have.

After an unexpected collision at the village train station, their lives suddenly become connected when Cole clumsily spills his coffee on Tom and it sets into motion something greater. Tom is wary of listening to his heart and Cole is distracted by the threat of losing everything. Each possesses something the other desperately needs, but can they ignore bad timing to listen to their hearts?

Review:  The majority of this story was light and sweet. I loved the very down to earth British thing going on here. I found it all super charming. This book was a tad sweeter than I’d normally enjoy but it worked for me. The MCs were just too adorable together not to get swept up in their love story. Their connection wasn’t expected or according to Tom the best timing but it was lovely. I was very happy with the light and easy feel of this book. Riding that new love buzz. Then the the last third of the book took a very angsty turn. For me personally this derailed the vibe the book had going. I still enjoyed it. The characters were great!

Cole and Tom meet one morning waiting for a train to the city. Tom is late for his job as a newspaper writer and it’s Cole’s first day of work off his family farm. Cole is immediately interested in Tom. Tom isn’t really looking for a guy. He’s so focused on work and his last relationship years earlier ended badly. Cole is gorgeous, honest and clumsy. He’s only getting a job because he and his aunt’s farm is struggling. They need to money working at the bar can offer. It’s all very out of Cole’s element but the genuine hard working man that he is makes him a success at it. Living and working in the same areas have the guys run into each other again. They get to know each other and soon the attraction turns into more.

Ricky, Tom’s best friend, was hilarious. He owns an adult book store by day and is a drag queen by night. He’s totally outrageous and not at all apologetic about it. He added a lot of fun and humor to the story. He’s more than that though. I was totally intrigued by those little glimpses past his persona hinting at all the pain hiding there . I’d love to read more about Ricky. I think I may have liked him even more than Cole. Crazy but true. I really liked Rox too. I think these secondary characters added a lot of support to the main characters.

I really liked Cole. He’s so solid and genuine. He knows he wants Tom and never wavers from that. He’s always warm and supportive. Wrapped in a hot farm boy package making him a total catch. Tom is s bit of a mess but being with Cole made him realize he needed to change up his life if he ever wants to be truly happy. Stop focusing on a job he may not love as much as he thought and enjoy his life. To take a chance with his heart again. I think what made me enjoy this book so much is how I got to know the characters through their actions and interactions. I love that I feel like I know these characters. The blow up towards the end left me a tad disappointed but I got over it quickly. I’d definitely recommend this book. A truly charming love story with lovable characters. It’s a slow burn in the sexy department but for these characters it worked. They wanted the real thing and that’s what they found with each other.