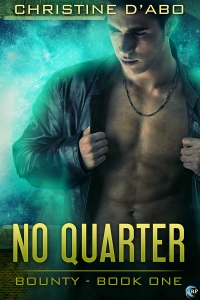 Blurb: When bounty hunter Gar Stitt is given a simple locate-and-retrieve mission, he’s convinced it’s a waste of his skills. His success rate is legendary, after all, and Captain Faolan Wolf isn’t hard to find. He’s the most notorious pirate in the galaxy, and when he shows up planetside to take his pleasures, he’s far from subtle.

Faolan never expected a hot but tightly wound hunter to walk into his private party and try to apprehend him single-handedly. And when an unexpected betrayal forces them to work together, Faolan’s even more surprised to find himself drawn to Gar personally—especially since neither of them do personal.

Gar had intended to put Faolan in prison. Instead he finds his solitary existence shaken by his desire for the pirate. And when the bounty hunter becomes the hunted, he must put his faith in Faolan and his pirate crew, or run the risk of ending up dead.

Review:  Gar Stitt is a successful bounty hunter. He’s going to catch Captain Faolan Wolf and bring him in. Gar isn’t aware Faolan set himself up to be captured. And of course he set himself up in the sexiest way possible. Faolan becomes Gar’s prisoner as aphrodisiacs flow through the air. Both men are affected. Faolan lets Gar in on the fact he wanted to be caught. Gar gets new orders to bring Faolan and his newfound property in to his boss. Things get pretty hairy when Gar’s boss tries to kill both men. Gar is stunned by the betrayal. Gar and Faolan have to seek shelter with Faolan’s pirate crew. By the time Gar and Faolan rendezvous with the crew they’ve developed a rather close relationship. Both men are surprised by what they learn when Gar meets the crew, and Gar is not only surprised but hurt by what he learns about Faolan’s health. Both men then have to fight for their lives as their enemies continue to chase them.

Both Gar and Faolan are alone. Gar is not only physically isolated from people, but he doesn’t search out companionship. Faolan refuses to allow his friends and ship mates a real look at what he’s going through. Both men are not only alone, but deeply lonely. I’m not sure if they recognize a kindred spirit or if this was just insta-love, but both men fall for each other more than they expected. It was okay. Both men found themselves not knowing why this one particular guy was one they’d fall for.

I enjoyed reading this book and both the characters of Faolan and Gar, but at the same time I didn’t find myself thinking any deep thoughts or having any preconceived notions challenged. The baddie was unrelentingly bad. Gar and Faolan were both morally good. Gar’s agreement to enter into a relationship with a guy with some serious health problems was the most challenging aspect of the story, and I still didn’t find the circumstances overly dire.