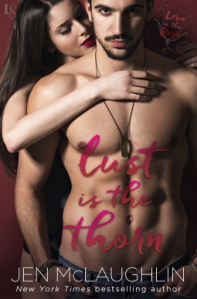 Blurb: From the bestselling author of Bad Romance (“A sexy, emotional, steamy read.”—Addison Moore) comes an edgy novel about a reformed bad boy training to be a priest and the fallen angel who makes him think twice about giving up earthly pleasures.

Growing up hard and fast on the mean streets of Chicago, Thorn McKinney didn’t have a prayer—until tragedy inspired him to join the seminary. Now the time has come to take his vows, and yet he’s haunted by the woman he can’t leave behind: his best friend’s little sister. Despite Thorn’s promises that he’d keep her safe, she’s going through hell. And now he finds himself torn between duty and desire, entranced by the seductive pull of her trusting eyes, innocent heart, and sinfully sweet curves.

Trying to let Thorn pursue his calling, Rose Gallagher has been hiding some things: namely her abusive boyfriend and her job as a stripper. But when she hits rock bottom, Thorn is there for her—and now there’s no denying the raw temptation that draws them together in their darkest moments. Rose may have found salvation in his strong arms, but she knows that Thorn must choose his own path: in the church, or in the warm embrace of a woman’s love.

Review: This book had a lot of heat and an impressive amount of backstory delivered through small flashbacks and conversations between the characters. What it also had was an incredibly looooong shower scene that was as intense as it was angsty. Yikes! I never thought they’d get together, but it was too good not to keep reading. Thank goodness the rest of the book moved well and the characters solved their dilemma before my aneurysm exploded.

Don’t buy into the stereotypical this guys a priest messing around! Thorn was anything but. Because of the horrible accident that had killed his best friend Mikey and left him and Mikey’s sister Rose alone, he’d been devastated, blaming himself and only wanting it to end. Armed with a gun, determined to end it all, he’d stumbled into a Catholic Church only to find redemption and a new path. Becoming a priest would hopefully absolve him of his guilt but it meant he had to give up his love for Rose.

Rose Gallagher had lost more than her brother Mikey that night eight years ago. She’d also lost her best friend and the man she loved. Thorn really wanted to be a priest and serve others and she wanted him to have what he wanted, but selfishly, she wanted him for herself more. Frustrated with the situation, she’d kept secrets about how bad things were for her until the night she was attacked.

When Thorn discovers her reality, his answer is to take care of her. But how can a Catholic seminarian student waiting to take his vows do that? Being with her just reinforces his desire and love for her; Rose doesn’t want to get used to Thorn being around because she knows it’s temporary and will only make his leaving harder.

How can he keep his word to her dying brother, have Rose, and still be true to the path that had saved him?

Jen McLaughlin takes a taboo romance and with abundant love, lust and pain, walks you through the fire to the HEA. It’s definitely worth the time!