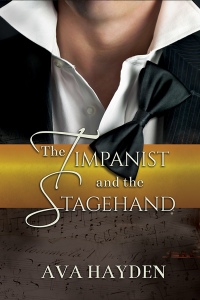 Blurb: Ren Murphy is a stagehand. He’s also a loyal friend, a gifted musician, and an inspiring teacher—but most people don’t see past his job. Ren knows that crushing on the Oilton Philharmonic Orchestra’s principal timpanist, Christoph Theoharis, is a waste of time. Christoph brushes off highly eligible would-be suitors regularly. What chance would a stagehand have? Christoph doesn’t even notice Ren’s existence—until one fateful night when chance or luck or maybe fate gets Ren Christoph’s undivided attention.

Old betrayals overshadow both men’s lives, yet each sees something compelling in the other, something that won’t let either walk away. Ren and Christoph may be each other’s best hope of finding a happy-ever-after, but to do that they’ll have to forgive old wrongs. They’ll have to let go of the pain in their past before it destroys their hope for a better future. Most of all, they’ll have to find a way to believe—in possibilities and each other.

Review: Music lovers might appreciate this story a bit more than me given all the references scattered throughout it. This was a sweet and easy short story about a guy named Ren who has little ambition in life beyond his job as a stagehand for an Orchestra. He works. He teaches kids to play drums. Ren is also a member of a band with a small but loyal following. He’s got a crush on the timpanist but thinks he doesn’t stand a chance. It’s also frowned upon to hook up with the talent. A little chatting and flirting lead to a kiss. Which leads to a budding knew romance between the two.

I think this story was okay but not memorable. Things are pretty easy between the MCs. A little angsty at times. There’s some self esteem issues each MC deals with that causes some problems in their relationship. Ren feels like the other men in the story who are obviously interested Christoph are more they type Christoph would want to be with. Christoph has trust issues based on events in his past that come back to cause trouble for the couple. Ren has lingering resentment with his parents based on his coming out when he was 17. They’ve tried to make amends but Ren is stubborn. Christoph is ashamed of where he comes from and likes to keep his past secret.

I don’t know if the secondary story lines really helped the story much because it kept Christoph and Ren apart while dealing with all the other stuff. For me I’d have rather had more on page time with the MCs together. Especially in a book of this length. This story is a short and it felt like it. I just never really got into it.