The Wild World of Equestrian Sports
My newest release, Unstable Stud, takes place on a horse farm in Kentucky, and not just any horse farm, but a Thoroughbred racing farm. And even more specifically, a farm that breeds and trains horses for steeplechase racing. How’s that for specific?

Equestrian sports come in all kinds, from the very elegant to the absolutely insane. While Bywater Farms has its specialty, Joe, the trainer, actually draws on a variety of techniques to help prepare the horses and riders for their races, so I thought I’d prepare a little guide to equestrian sports.

Show riding
Show riding is the kind of thing you see at the Olympics. It’s broken down into two different kinds of events (although there’s also the cross-country portion of the three-day event). You have dressage and show jumping.

Dressage is riding at its most controlled. Every movement on the part of both horse and rider is choreographed. It is the definition of poetry in motion. It is performed to music and is about both artistry and athleticism.

Watch the rider. If he or she is doing the job right, you won’t see the commands. The rider guides everything with twitches of the fingers and calves. Speed changes, gait changes, lead changes, all of it done without any huge signals. A rider who can do this has the control of the art of riding that puts him in a position to do any other kind.

Show jumping is the Olympic companion to dressage riding. The horse and rider have a set course of jumps to complete cleanly (without knocking any over) as quickly as possible. Knocking over a jump is a time penalty. This is a highlights video, not a single rider completing a course, but it shows the challenges and scoring as well as some beautiful horses on some impressive jumps.

From the riders’ perspective, it’s a different kind of exercise. Gone is the necessity of perfect control, and in its place is getting the horses to take the jumps (and take them well). It’s all about using the leg to drive them forward and cage them in so they can’t run out like the one horse does, as well as making sure their speed and footwork is right so they clear the jump instead of knocking over a beam.

The third piece of eventing is cross-country jumping. This is also a course of jumps, but instead of being in a ring, it’s out on a track or in a field. This is purely a timed event. Whoever finishes fastest wins. Of course, if you’re doing a three-day event rather than just cross-country jumping, the overall winner is the one with the highest combined scores.

You can see it’s much less formal than either the show jumping or dressage. And from a riding perspective, it’s not about control or finesse. It’s about speed, but it’s still one rider at a time. This particular video comes from the World Equestrian Games that were held in Lexington in 2010, the first time they’d ever been held outside of Europe.

Racing
Most people are familiar with Thoroughbred horse racing. Kentucky Derby, anyone?

Most horses in these kinds of races are two- or three-year-old horses, still very young in their lives and potential racing career. We had a huge milestone last year in racing. American Pharoah won the Triple Crown (Kentucky Derby, Preakness Stakes, and Belmont Stakes), the first horse to do so since Affirmed in 1978. For people who follow racing, jockeys are as big a deal as horses. If you listen to the commentary, the jockey, Victor Espinoza, won the Derby for the second year in a row. From a riding perspective, it’s a case of knowing your horse and staying close enough to the front that you can push at the end without wearing your horse out before the crunch.

Less familiar—to American audiences, anyway—is the steeplechase. This is still a race with all the horses on the field at the same time, but they tend to be slightly older horses because this is an endurance race as well as a race of speed and skill with all the jumps. As opposed to “the fastest two minutes in sports,” the Grand National Steeplechase is a grueling ten minutes, so it’s not just a question of who’s the fastest but who can hang on. This is another one of those pacing issues—fast enough to stay in the field, but not so fast that you wear your horse out before the end.

King of Hearts, the equine star of Unstable Stud, is a steeplechase racer with a love of jumping that’s almost as great as his love for his rider.

Finally there’s harness racing, where the horses race at a specific gait – either a trot or a pace depending on the race – pulling a two-wheeled cart called a sulky. One of the most famous harness racetracks is The Red Mile, in Lexington, although the story doesn’t touch on that. Harness racers are Standardbred horses instead of Thoroughbreds, but their bloodlines are just as registered and maintained.

Thank you for It’s About the Book for hosting me today and to everyone for reading! If you’d like to win an ebook of one of my stories, share your favorite horse book with me in the comments! 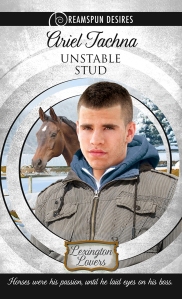 Blurb
Horses were his passion, until he laid eyes on his boss.

Eighteen months ago, tragedy struck Bywater Farm when a riding accident killed Clay Hunter’s lover and traumatized his prize horse, King of Hearts. Clay and King lingered in limbo, surviving but not really living, until a breath of fresh air in the form of Luke Davis, a new groom in the stud barn, revives them both.

When a fall from King’s back sends Luke to the emergency room, Clay watches the shaky foundation of their budding relationship tumble down. Can Clay really love a jockey again, or will his fear of losing another man he loves keep them apart for good?

Excerpt:
“How long has it been since you last rode a horse?” Joe asked Luke three days later. They’d finished King’s longe session, but as soon as Luke got him settled in his stall, Joe had summoned Luke back to the arena. A chestnut mare Luke didn’t know stood tacked up against the wall.
“About six years,” Luke said. “Maybe seven. I don’t feel like I’ve forgotten, but I’m certainly not in the shape I was in then.”
“Let’s see how you do, then. Katie is all ready for you.”
“Katie?” Luke asked. “Is that really her name?”
“She’s registered under the name Kaitlyn’s Queen, but everyone calls her Katie. She’s not much of a queen,” Joe said.
“She’s lovely,” Luke said. He walked over to greet her. She tossed her head at him, but her ears were perked forward with interest. He stroked her forelock and then her neck. “Hello, Katie my girl. Are you going to be nice to me today?”
She blew at him. He laughed and unhooked the lead rope so he could lead her into the arena. Going through his mental checklist, he made sure her bridle was on and fit properly, checked that the saddle was far enough forward and that the girth was tight, and approximated the length of the stirrups based on the length of his arm. When all that was done, he took a deep breath and swung up onto her back.
Oh God, he had missed this feeling. Nothing compared to the rush of sitting on horseback with the world at their feet.
“Walk her around a bit,” Joe said. “Give her a bit of a warm-up and see how your muscle memory is. She has a very sensitive mouth, so use your legs and weight to guide her as much as possible.”
“You couldn’t have put me on some draft horse with steel gums?” Luke groused.
Joe chuckled. “No, because you won’t learn anything from riding a horse like that. Even more importantly, King isn’t like that. His mouth is almost as sensitive as Katie’s.”
Luke tried to remember everything he’d learned about using his body rather than his hands to control a horse. Weight back to slow down, pressure from the leg against their side to encourage their back legs to move away from it. Left leg to turn left, right leg to turn right, exactly the opposite of what was intuitive.
Keeping his hands as still as possible, he guided Katie to the rail and then walked her around the perimeter of the arena.
“Well done,” Joe said. “Can you do it at a trot?”
Luke took a deep breath, collected himself, and squeezed Katie’s sides to get her moving. She had a smooth trot, fortunately, because it took a few tries to get the rhythm of posting. Hitting the saddle was jarring enough with a smooth trot. If she’d had a bouncy trot, he’d have been in a world of hurt.
After a few beats, though, his body remembered the trick of it, and he settled into the rise and fall of a posting trot. He checked his diagonal automatically and had to fix it, but he couldn’t be blamed for not getting it right on the first try in years.
“You’re remembering well,” Joe said. “Cross the diagonal and change directions. Easy on her mouth.”
Luke tried to do what Joe said, but Katie didn’t take quite as easily to leaving the rail as she had to staying on it. Luke worked his leg as best he could, but he had to resort to the reins to turn her head. He made sure to just twitch them a little, but she still shook her head in protest as she finally started crossing the arena.
He did manage to get her going the right way when they reached the opposite rail. He switched diagonals on his posting and waited for Joe to give him suggestions for improvement.
“Bring her back down to a walk,” Joe said. Luke settled in the saddle, letting the movement of his hips absorb the bounce until she took the hint and slowed to a walk. “Good, now bring her over here to me.”
“It’s a lost cause, isn’t it?” Luke asked when he brought Katie to a stop next to Joe.

When Ariel Tachna was twelve years old, she discovered two things: the French language and romance novels. Those two loves have defined her ever since. By the time she finished high school, she’d written four novels, none of which anyone would want to read now, featuring a young woman who was—you guessed it—bilingual. That girl was everything Ariel wanted to be at age twelve and wasn’t.
She now lives on the outskirts of Houston with her husband (who also speaks French), her kids (who understand French even when they’re too lazy to speak it back), and their two dogs (who steadfastly refuse to answer any French commands).
Visit Ariel:
Website: http://www.arieltachna.com
Facebook: http://www.facebook.com/ArielTachna
E-mail: arieltachna@gmail.com