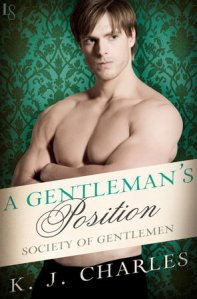 Among his eccentric though strictly principled group of friends, Lord Richard Vane is the confidant on whom everyone depends for advice, moral rectitude, and discreet assistance. Yet when Richard has a problem, he turns to his valet, a fixer of unparalleled genius—and the object of Richard’s deepest desires. If there is one rule a gentleman must follow, it is never to dally with servants. But when David is close enough to touch, the rules of class collide with the basest sort of animal instinct: overpowering lust.

For David Cyprian, burglary and blackmail are as much in a day’s work as bootblacking—anything for the man he’s devoted to. But the one thing he wants for himself is the one thing Richard refuses to give: his heart. With the tension between them growing to be unbearable, David’s seemingly incorruptible master has left him no choice. Putting his finely honed skills of seduction and manipulation to good use, he will convince Richard to forget all about his well-meaning objections and give in to sweet, sinful temptation.

Review:  Oh I had such greedy anticipation for this story – knowing the elephant in the room between Lord Richard and his dedicated valet, David Cyprian, was finally going to be met head on after a sketchy build- up in the first two books of this glorious series. Thankfully, we readers didn’t have to wait the same 4 ½ years that Cyprian did for gratification.

As per usual with KJ Charles, my expectations were met and surpassed. The style I’ve come to expect from this author: whip sharp wit, delicious dialogue, heated heart-to hearts, jaw dropping sex, and epic smack-down cussing sequences – all were present in spades. I dare say I may have been as satisfied as Richard was by the end of the book. 😉 All of my beloved Ricardians are back, dealing with trouble while meting out plenty of their own, delivering the best curse lines in history along the way.

Becoming valet to Lord Richard Vane several years past had been Cyprian’s blessing and his curse. While he always took great pride in his work, he longed to give Richard satisfaction. All manner of satisfaction. All. Richard had been attracted to Cyprian from day one, but of course managed to tamp down any such unseemly desires and lock them away tight. Oh. So. Tight. Neither man wants to lose all the good they do have – a bird in the hand right? But one of them is about at his wits’ end.

I absolutely adore Richard and Cyprian. They are so different, yet share so many similarities: Pride, stubbornness, loyalty, and cunning to name a few. KJ Charles does such a phenomenal job of being true to the historical Georgian era while humanizing her characters to a fault. Class, station, vanity, and decorum are very much in play for Lord Richard as well as for Cyprian. These men and their cohorts manage to think, feel, and act outside of the societal box while still having to operate within the confines of it. Living in the times they did, their very lives depended on propriety.

Much of Richard’s past comes to light, and with it the realization of why he reacts the way he does in his many relationships, including his disastrous handling of Dominic. Cyprian bears witness to some of Richard’s darker memories including the questions he still ponders regarding his mother. Eventually the years of unresolved attraction Richard and Cyprian have amassed while resolutely keeping their distance comes to a head. Yes, I know, bad pun, only – not really. Their unleashed emotions lead to a miscue on Richard’s part (putting it mildly) which lands him in the role of having to repair, in fact to redefine, his relationship with Cyprian. Things get messy, nothing is resolved quickly. Our Lord has to work for what he wants, and he wants Cyprian. I took sheer delight in watching the stick up Richard’s arse get replaced by sweeter, more satisfying, ah, goods. I mentioned Cyprian gets to find out more about Richard’s family and past- but Richard also gets a hefty dose of Cyprian’s family – including the origin of his surname – and whoa, is his mama fierce. She has no qualms about giving Richard a good piece of her mind. With her words, as well as the words of Dominic, resounding in his mind, Richard earns a thing or two about pride of one’s achievements. Richard’s brother Philip provided some surprising, bolstering input as well. Indeed Lord Vane realizes how the definition of said pride is intrinsically the same for every man, no matter his position. This was not an easy process for Richard. The progression of his attitude, how he came to wrap his mind around the fact he had been wrong about what he and Cyprian could be to one another, was beautifully detailed. Cyprian and Richard engaged in some of the most brutally honest – and saucy – conversations I’ve had the pleasure to read.

Silas is prominently present in this book – yay! – and he’s in Cyprian’s confidence. I adored seeing the two of them hit it off and continue to be there for one another throughout the story. Such a talented pair of schemers. Scheming soon becomes the name of the game. Smack in the middle of dealing with his problems with Cyprian, Richard learns that Ash has managed a major blunder. Seriously, Ash? Who would have thought. Oh, I can’t wait for the audio version to actually hear his anguish. Poor Ash, he’s managed to practically hand something damning to Lord Maltravers – his meddlesome, vengeful brother – on a silver platter. This something could bring down not only Ash and Francis, but Silas and all of the Ricardians. This calls for the best at covert operations, so who you gonna call – Foxy David of course, Cyprian himself. Cyprian enlists the aid of Silas and with the two of them running point, the Ricardians band together once more to take on their enemies. How they pulled this off was no less than glorious.

Yes, Richard and Cyprian make it to détente, and way, way beyond. How the author gets them there involves enlightening dialogue, hard won truths, and perhaps a bit of groveling. When these two finally come together, the fireworks are as fiery as Cyprian’s blaze red hair. This book was everything I could have dreamed of and more. So satisfying.

KJ Charles continues to wow me with her writing. Each and every character is well defined. Their dialogue is rich, raw, plausible, and rife with meaning. The interspersed humor is second to none. I’ll never tire of those period specific barrage of curses! This entire series is an epic reading experience. Not to be missed.

One thought on “A Gentleman’s Position (Society of Gentlemen #3)”