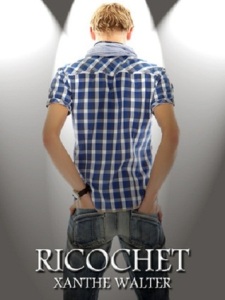 Blurb: When the right dom is all wrong!

Matt is a big star on the hit TV show, Collar Crime, and he’s looking for a dom who ticks all the right boxes, including being as tidy and organized as himself.

That definitely isn’t his chaotic co-star, Rick, with his spanking fetish and habit of tying a different sub to his bed every night.

Review: I read this book years ago and loved it. I dove back in happily to see if anything changed. Unsurprisingly, the book was exactly the same! Anyway, Matthew Lake is a sub and an actor on the hit show Collar Crime. He makes the safe choice when he chooses which Dom he wants. He wants things neat and consistent. His close friend, Rick O’Shea is his polar opposite. Not only is Rick a Dom, but he’s reckless and lives his life by the seat of his pants. Rick has fun and lives the thrilling life of a young and sexy actor on a hit TV show. Sadly, Rick attracts a bit too much attention with his thrilling lifestyle. The show’s producers have to step in. Rick has to shape up. The whole cast of Collar Crime can see what a toll this takes on Rick. Behaving is hard! Matt draws the short stick and becomes Rick’s spank buddy. For a time, both Rick and Matt are really happy. They ignore the burgeoning feelings they have for each other. When Matt needs some help working through a tough scene on the set Rick steps up and offers to do a real scene in his playroom for Matt, so he can really connect with what his character is going through. It’s an amazing experience for both of them. Matt realizes he’s deeply in love with Rick. Rick realizes he’s terrified and pushes Matt away. Rick pushed Matt right into the arms of a sexy billionaire Dom who looks perfect for Matt. Looks can be deceiving.

This book is set in a BDSM universe. Everyone is bisexual and either a sub or a Dom. Despite that set up, this book is pretty tame in terms of its BDSM content. More than anything it’s about the two main characters learning about themselves. I really like both Matt and Rick, and I like them together. I think this is a good, character driven story that is both entertaining and sweet. This is pretty much how I felt the first time I read it. This time, I was a bit more discerning. I don’t remember feeling the character of Sebastian Rule was so over the top wrong. Yeah, I remembered him as skeevy, but I remembered Matt being more interested in Sebastian himself as opposed to just the idea of Sebastian. Off the page Matt enjoyed being with Sebastian. On the page he was never really comfortable nor did he ever fully enjoy the idea of what Sebastian had planned for their future. It did lend a sense of urgency to the plot, but I feel that would have been there anyway. The second time around Sebastian fell flat as a bad guy. He wasn’t multi-faceted enough for me.

Matt’s story of personal growth was mirrored interestingly in the story of Ben, the character he played on Collar Crime. I don’t remember noticing this at all the first time. Maybe I did. Who knows. Interestingly, there were very few parallels between Rick and his character Alex. Alex did his best to rescue Ben, which charmingly became Matt rescuing himself from Sebastian. I do say Matt rescued himself, but he did need that push from Rick/Alex to get his own ball rolling. Rick’s character growth came mostly as a result of someone explaining reality to him. The ‘Splainer in this instance was Karl. I’ve become much more sensitive to outside characters explaining how life works to a reluctant character as a means to move the plot forward. As a plot device I find it runs the gamut from ludicrous to insulting. I didn’t like it here.

The character of Matt has OCD and counts items and neatens things to ease his nerves. It’s not the best expression of OCD I’ve read but it’s plausible enough. Rick is able to ease Matt’s symptoms by helping him explore his subspace. Unfortunately, mental illness can’t be erased or eased by finding the right partner, much in the same way cancer cannot be eased or erased by finding the right partner. This is where the book and I have parted ways since I last read it. This didn’t bother me in the past. Now, I find this concept on the edge of disgusting. I could get ranty here, so I’ll just limit myself to saying mental illness is illness and there is no such thing as a magic spanking or magic sex that will cure any illness.

Overall, I still think this book is an enjoyable read even if I have parted ways with an aspect of it. It’s good if you like to sink yourself into a nice character driven drama with moments of comedy and a hint of kink. And, if it ever gets written, I will certainly read a story about Karl and Daniel!